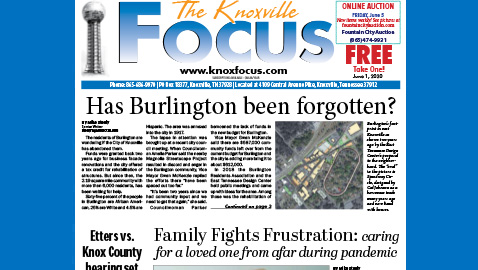 Has Burlington been forgotten?

The residents of Burlington are wondering if the City of Knoxville has abandoned them.

Funds were granted back two years ago for business facade renovations and the city offered a tax credit for rehabilitation of structures. But since then, the 2.19 square mile community with more than 6,000 residents, has been waiting for help.

Sixty-five percent of the people in Burlington are African American, 25% are White and 4.5% are Hispanic. The area was annexed into the city in 1917.

The lapse in attention was brought up at a recent city council meeting. When Councilwoman Amelia Parker said the nearby Magnolia Streetscape Project resulted in discord and anger in the Burlington community, Vice Mayor Gwen McKenzie replied the efforts there “have been spaced out too far.”

“It’s been two years since we had community input and we need to get that again,” she said.

Councilwoman Parker bemoaned the lack of funds in the new budget for Burlington.

Vice Mayor Gwen McKenzie said there are $587,000 community funds left over from the current budget for Burlington and the city is adding more bring it to about $612,000.

In 2018 the Burlington Residents Association and the East Tennessee Design Center held public meetings and came up with ideas for the area. Among those was the rehabilitation of old buildings, landscaping, lighting and sidewalks. The residents had also suggested new restaurants, theatres and recreation facilities.

Citizens of Burlington complained then about the problems in getting bank loans to purchase or improve property. Only about $350,000 in city funding was in the city budget then for the area.

Dr. Dasha Lundy, who faces Reginald M. Jackson for the District One Knox County Commission seat, is the past president of the Burlington Residents Association and spoke to The Focus following the city council meeting. She said that during recent city budget meetings many community leaders came together to speak on increasing funding.

“Unfortunately that did not go in our favor,” Lundy told The Focus.

“Burlington has been on the agenda for years for redevelopment. I watched as downtown was being restored. Happy Holler has been restored also,” she said. Lundy said it seems development happens everywhere but in the black community.

“The zoo has approximately a half million visitors in a year. Can you imagine those people visiting the Historic Downtown Burlington District for shopping, arts and cultural activities and the great food? Can you see the revenue that comes with that?” Lundy commented to The Focus.

“Burlington is a diamond in the rough. I want people to recognize that Burlington can be a place of destination for East Knox County,” she added.

“We just need the support of the City and County governments and the Private Sector to assist with the redevelopment process. The community is ready.”