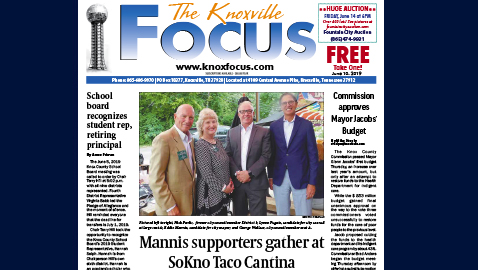 Knoxville Republican mayoral candidate Eddie Mannis made a campaign stop at SoKno Taco late Thursday afternoon where he was greeted by supporters and despite overcast skies and a few sprinkles, spirits weren’t dampened.

The gathering was held on the patio of the restaurant and was an informal meet and greet.

Mannis spoke with supporters individually but did not make a formal address and his schedule, which was extremely packed last week, excluded him from enjoying appetizers with the crowd.

But he wanted to stump in South Knoxville before the August primary election and the gathering was organized by City Councilman Nick Pavlis.

Councilman George Wallace was in attendance along with County Commissioner Carson Dailey and others.

“It’s been a busy week but it was important for me to come here, to come to South Knoxville,” Mannis said. “I wanted to come and see some of my South Knoxville friends and Nick Pavlis is very gracious to have organized this event.”

Mannis was obviously pleased with the turnout  in spite of the weather forecast which turned out not to be much of a factor.

Pavlis said he is giving his support to Mannis in order to keep Knoxville moving in the right direction.

“Knoxville is in a good place and we want to keep moving in a positive direction,” Pavlis said. “Eddie has a very successful background in business and finance and he’ll be fiscally responsible.”

Mannis is a lifelong Knoxville resident and aims to make Knoxville’s neighborhoods safe and keep the city economically vibrant. He also seeks to unite Knoxville.

Mannis grew up in a blue collar community. He hails from the Frog Level section of Inskip.

He said that it was his parents that instilled his work ethic that has him campaigning tirelessly throughout the city in his effort to be the next mayor.