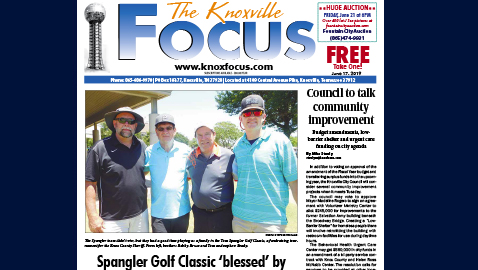 Spangler’s first tournament was in October of 2017 at Gettysvue Country Club and had one afternoon shotgun start. That was prior to his election as Knox County Sheriff.

Last week’s tournament had two shotgun starts – one in the morning with 18 four-player teams and one in the afternoon with 17 teams.

“It is a fund raiser,” said Sheriff Spangler in between the two flights. “We’ve got some campaign debts to fulfill and we want to just get things ready.

“Obviously, I plan on wanting to run again with things that are going on, and this way we are able to get those finances in hand early.”

Sheriff Spangler said what made his fundraising tournament special was the turnout.

“The support that people come out, that they have that much faith in me to do the job that we are doing,” he said. “And it’s a team effort, it’s not just me. It’s all the people and the men and women in that Sheriff’s office.

“I’ve been elected to lead that agency and I’m very honored and blessed to be able to do that. But I have a lot of good people that make my job a lot easier.”

Sheriff Spangler emphasized he was not responsible for the weather.

“No sir,” he chuckled. “It’s been a glorious day and we are blessed.”

He didn’t sugarcoat his team’s play either in the best-ball event.

Brothers Bobby and Bruce and nephew Brady joined Tom to make up the Spangler foursome.

Sheriff Spangler was asked if he had any memorable shots in the morning round.

“I couldn’t say that I have, so unfortunately no. But what I will say, I was blessed to be able to spend time with my family. I’m a hacker. I’m not a golfer, but we had a good time.”