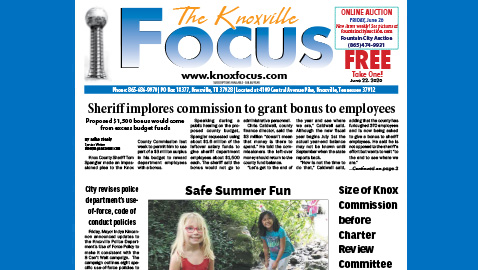 Knox County Sheriff Tom Spangler made an impassioned plea to the Knox County Commission last week to permit him to use part of a $3 million surplus in his budget to reward department employees with a bonus.

Speaking during a public hearing on the proposed county budget, Spangler requested using about $1.6 million of the leftover salary funds to give sheriff department employees about $1,500 each. The sheriff said the bonus would not go to administrative personnel.

Chris Caldwell, county finance director, said the $3 million “doesn’t mean that money is there to spend.” He told the commissioners the left-over money should return to the county fund balance.

“Let’s get to the end of the year and see where we are,” Caldwell said. Although the new fiscal year begins July 1st the actual year-end balance may not be known until September when the state reports back.

“Now is not the time to do that,” Caldwell said, adding that the county has furloughed 370 employees and is now being asked to give a bonus to sheriff employees. He said he is not opposed to the sheriff’s effort but wants to wait “to the end to see where we are.”

Sheriff Spangler’s voice cracked when he said, “I’m more than proud of the men and women and what they do.”

He also said he fears for the future of the department, noting that 25 employees are eligible to retire this year.

Lieutenant Gabe Mullinax said the sheriff’s department “can’t get the help we need” and is stressed and said it is frustrating. Speaking of Sheriff Spangler, Mullinax asked, “How can one man in uniform handle everything?”

Mullinax said the department is losing deputies to adjoining counties and cities because of lower pay in Knox County.

The commission meets today at 5 p.m. in regular session and a budget vote is expected on Wednesday after the Finance Committee meets.