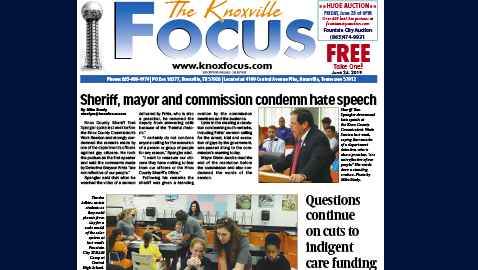 Knox County Sheriff Tom Spangler spoke last week before the Knox County Commission’s Work Session and strongly condemned the remarks made by one of the department’s officers against gay citizens. He took the podium as the first speaker and said the comments made by Detective Grayson Fritts “are not reflective of our people.”

Spangler said that after he watched the video of a sermon delivered by Fritts, who is also a preacher, he removed the deputy from answering calls because of the “hateful rhetoric.”

“I certainly do not condone anyone calling for the execution of a person or group of people for any reason,” Spangler said.

“I want to reassure our citizens they have nothing to fear from our officers or the Knox County Sheriff’s Office.”

Following his remarks the sheriff was given a standing ovation by the commission members and the audience.

Later in the meeting a resolution condemning such remarks, including Fritts’ sermon calling for the arrest, trial and execution of gays by the government, was passed along to the commission’s meeting today.

Mayor Glenn Jacobs read the end of the resolution before the commission and also condemned the words of the sermon.