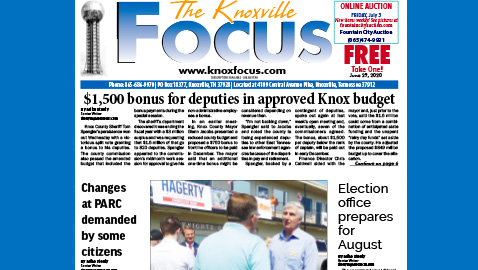 Knox County Sheriff Tom Spangler’s persistence won out Wednesday with a victorious split vote granting a bonus to his deputies. The county commission also passed the amended budget that included the bonus payments during the special session.

The sheriff’s department discovered it was ending the fiscal year with a $3 million surplus and was requesting that $1.5 million of that go to 820 deputies. Spangler appealed to the commission’s midmonth work session for approval to give his non-administrative employees a bonus.

In an earlier meeting, Knox County Mayor Glenn Jacobs presented a reduced county budget and proposed a $750 bonus to frontline officers to be paid in December. The mayor said that an additional one-time bonus might be considered depending on revenue then.

“I’m not backing down,” Spangler said to Jacobs and noted the county is losing experienced deputies to other East Tennessee law enforcement agencies because of the disparities in pay and retirement.

Spangler, backed by a contingent of deputies, spoke out again at last week’s open meeting and, eventually, seven of the commissioners agreed. The bonus, about $1,500 per deputy below the rank of captain, will be paid out in early December.

Finance Director Chris Caldwell sided with the mayor and, just prior to the vote, said the $1.5 million could come from a combination of anticipated state funding and the unspent “rainy day funds” set aside by the county. He adjusted the proposed $849 million budget up to cover the allocation.

At-Large Commissioner Justin Biggs gave a heartfelt plea for the bonuses, recalling his father’s 42 years in law enforcement, and said the $1,500 would make a difference to employee families at Christmas.

“You guys are underappreciated, I get it,” he said.

The budget for 2021 is lower than the current budget because of losses in revenue during the COVID-19 pandemic. Jacobs has called the loss “devastating” and Caldwell said everything looked great until March and then the virus outbreak occurred. The revenue loss led to layoffs, no pay raises for county employees, cutbacks and a total reappraisal of county and school budget plans and projects.

The approved budget continues, as in previous years, to propose no property tax increase which will remain at $2.12 per $100 of appraised value. Caldwell said that $3.8 million in the unassigned fund balance will be used during the coming year before pulling part of the bonus money from that fund.

The commission also approved $6.4 million during the new fiscal year for non-profit organizations and the first year funding of a five-year plan.