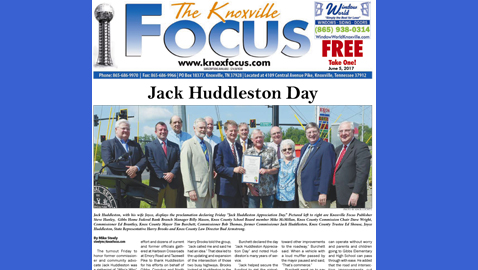 The turnout Friday to honor former commissioner and community advocate Jack Huddleston was a gathering of “Who’s Who” of Knox County elected officials. Burchett organized the effort and dozens of current and former officials gathered at Harbison Crossroads at Emory Road and Tazewell Pike to thank Huddleston for his efforts on behalf of Gibbs, Corryton and North Knox County.

State Representative Harry Brooks told the group, “Jack called me and said he had an idea.” That idea led to the updating and expansion of the intersection of those two busy highways. Brooks looked at Huddleston in the audience and said, “Jack, this is your intersection.”

“Jack helped secure the funding to get the signalization of this intersection started and to start working toward other improvements to the roadway,” Burchett said. When a vehicle with a loud muffler passed by the mayor paused and said, “That’s commerce.”

Burchett went on to say that Harbison Crossroads is safer today; businesses can operate without worry and parents and children going to Gibbs Elementary and High School can pass through with ease. He added that the road and intersection improvements cut school bus routes by 15 minutes.

“The growth in this community is not just the results of one person however, it takes an entire community of Jack Huddlestons. It takes people like Jack, Chairman Wright, Bud Armstrong and Steve Hunley to step up and work to make good things happen,” Burchett said.

“But Jack led the way on these improvements, so thank you Jack,” he said.

County Chairman Dave Wright spoke briefly and noted that another very special occasion is coming in the future, the opening of the new Gibbs Middle School.

Huddleston told the crowd that the honor was “one of the best things to happen in my lifetime.”

Burchett said that Jack Huddleston was instrumental in obtaining funds for a traffic light at the location and remained very active after leaving the county commission. He called Huddleston “a tireless advocate” for his community.