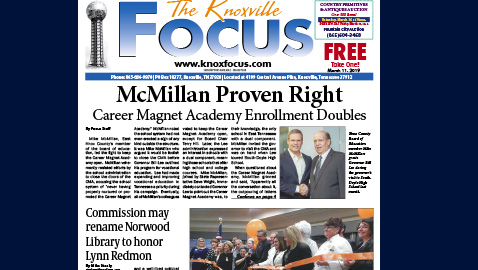 Mike McMillan, East Knox County’s member of the board of education, led the fight to keep the Career Magnet Academy open.  McMillan vehemently resisted efforts by the school administration to close the doors of the CMA, accusing the school system of “never having properly nurtured or promoted the Career Magnet Academy.”  McMillan noted the school system had not even erected a sign of any kind outside the structure.  It was Mike McMillan who argued it would be foolish to close the CMA before Governor Bill Lee outlined his program for vocational education.  Lee had made expanding and improving vocational education in Tennessee a priority during his campaign.  Eventually, all of McMillan’s colleagues voted to keep the Career Magnet Academy open, except for Board Chair Terry Hill.  Later, the Lee administration expressed an interest in schools with a dual component, meaning those schools that offer high school and college courses.  Mike McMillan, joined by State Representative Dave Wright, immediately contacted Governor Lee to point out the Career Magnet Academy was, to their knowledge, the only school in East Tennessee with a dual component.  McMillan invited the governor to visit the CMA and was on hand when Lee toured South-Doyle High School.

Asked if he felt vindicated, a still grinning McMillan demurred, saying, “I think it’s more about the members of the board having the wisdom to give the Career Magnet Academy a chance, as well as realizing it would be foolish to close the CMA before we knew what the governor and the legislature were going to do.

“I think the board members also, if they were really candid about it, knew the school system had never really promoted the CMA properly.  Hopefully, the school system will properly promote it and we will continue to see the enrollment grow by leaps and bounds.”

McMillan, the elder statesmen on the board of education, says he enjoys working with the current members and feels like he still has a role to play and can continue to accomplish things for his district.  Mike McMillan has long been recognized as the most outspoken advocate for the taxpayers and students on the board of education, a body oftentimes heavily weighted to teacher interests.  McMillan said he will continue to work with Representative Wright to urge Governor Bill Lee to visit the Career Magnet Academy.  McMillan said he was deeply impressed with his interactions with the students, who got busy sending emails to board members when they worried the CMA might be closed.

“Those were some of the most well-written personal testimonials I’ve ever read,” McMillan said.  “I’m not exaggerating at all.  Those youngsters put into words just exactly what the CMA had meant to them, the difference it had made in their lives.  I answered every single email I received from the students.”

McMillan said the students were also equally well-spoken when they appeared before the board of education.  “I think those youngsters made a very real impression on board members,” McMillan confessed.  “Quite a number of them wrote again to thank board members for supporting them and their school.  I wrote back to say they should have learned a valuable lesson – – – that local officials really do listen and they had been heard.”