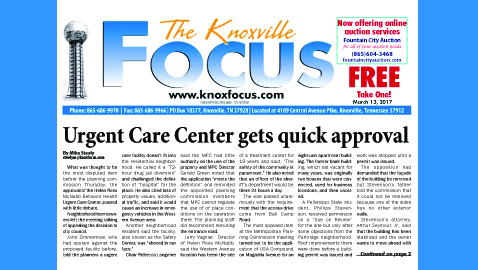 By Mike Steely
steelym@knoxfocus.com
What was thought to be the most disputed item before the planning commission Thursday, the approval of the Helen Ross McNabb Behavior Health Urgent Care Center, passed with little debate.
Neighborhood homeowners left the meeting talking of appealing the decision to city council.
John Zimmerman, who had spoken against the proposed facility before, told the planners a urgent care facility doesn’t fit into the residential neighborhood. He called it a “72-hour drug jail diversion” and challenged the definition of “hospital” for the place. He also cited loss of property values, additional traffic, and said it would cause an increase in emergency vehicles in the Western Avenue area.
Another neighborhood resident said the facility, also known as the Safety Center, was “shoved in our face.”
Chair Rebecca Longmire said the MPC had little authority on the use of the property and MPC Director Gerald Green noted that the application “meets the definition” and reminded the appointed planning commission members that MPC cannot regulate the use of or place conditions on the operation there. The planning staff did recommend rerouting the entrance road.
Jerry Vagnier, Director of Helen Ross McNabb, said the Western Avenue location has been the site of a treatment center for 19 years and said, “The safety of the community is paramount.” He also noted that an officer of the sheriff’s department would be there 24 hours a day.
The vote passed unanimously with the requirement that the access drive come from Ball Camp Road.
The most opposed item at the Metropolitan Planning Commission meeting turned out to be the application of USA Compound on Magnolia Avenue for an eight-unit apartment building. The former bank building, which sat vacant for many years, was originally two houses that were connected, used for business locations, and then vacated.
A Pellissippi State student, Phillips Stevenson, received permission on a “Use on Review” for the site but only after some objections from the Parkridge neighborhood. Roof improvements there were done before a building permit was issued and work was stopped until a permit was issued.
The opposition had demanded that the façade of the building be removed but Stevenson’s father told the commission that it could not be removed because one of the sides has no other exterior walls.
Stevenson’s attorney, Arthur Seymour, Jr., said that the building has been stabilized and the owner wants to move ahead with renovations.
After a failed request to postpone the request the commission moved to approve the use in a narrow split vote 8-7.
In an unusual request Robert Richards asked and received permission for a home office in a residence on Leyden Drive east of Grandview Drive. The retired natural trail consultant wants to run his consulting business from the house. Most people with home-based business don’t apply for permission but others do occasionally for legal and tax purposes.
Ron Davis, representing the Lyons View Community, spoke against the request saying the business might have a secondary impact on the neighborhood.
MPC Staffer Dan Kelly said the permit may be needed because the home is zone R-1.
In other action approval of the 2017 One Year Plan for Knoxville was postponed for 30 days after Norwood Neighborhood President Lynn Redmond pointed out some problems in the zoning map involving Tillery Avenue.
Over the objection the commission also voted to close a road or alley on North 6th Street that once lead to the Standard Knitting Mills property. A railroad crossing along the route was closed and the access curtailed. The city is working to develop access to the old mill site from Jessamine Street.