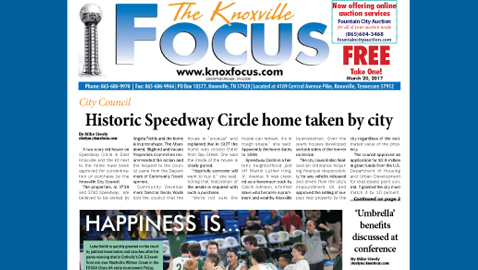 A two-story old house on Speedway Circle in East Knoxville and the lot next to the home have been approved for condemnation or purchase by the Knoxville City Council.

The properties, at 3738 and 3740 Speedway,  are  believed to be owned by Angela Fields and the home is in poor shape. The Abandoned, Blighted and Vacant Properties Committee recommended the action and the request to the council came from the Department of Community Development.

Community Development Director Becky Wade told the council that the house is “unusual” and explained that in 1927 the home was moved there from Gay Street. She said the inside of the house is totally gutted.

“Hopefully someone will want to buy it,” she said, noting that restoration of the inside is required with such a purchase.

“We’re not sure the house can remain, it’s in rough shape,” she said. Apparently the home dates to 1899.

Speedway Circle is a historic neighborhood just off Martin Luther King, Jr., Avenue. It was created as a horserace track by Calvin Johnson, a former slave who became a prominent and wealthy Knoxville businessman. Over the years houses developed on both sides of the former racetrack.

The city council also finalized an ordinance requiring financial responsibility for any vehicle released and driven from the city’s impoundment lot and approved the selling of surplus real property by the city regardless of the estimated value of the property.

The council approved an application for $2.9 million in grant funds from the U.S. Department of Housing and Urban Development for lead-based paint control. If granted the city must match it by 10 percent. Asked about the application Wade said the city had a previous grant and, with it, removed lead paint from 200 homes.

“We would like to continue the effort,” she said, adding that the funds cannot be used for other purposes.

The council voted to redefine auction houses and where the businesses are permitted within the zones of the city. They also approved a request from Wanda Moody to rezone a property on the west side of Middlebrook Pike to permit a senior assisted living facility.

Mayor Madeline Rogero announced she will hold departmental budget meetings from March 22nd until the 24th in Room 453 of the City County Building.

The council heard from HGTV about Knoxville being featured in the upcoming “Urban Oasis” show when a home in the Fourth and Gill Neighborhood will be remodeled. A 1910 bungalow will be totally remodeled.

The former Old South High School  on East Moody and Tipton Avenue was rezoned from Residential (R1) to Residential (R 1A) at the request of the planning commission and remains in a Historic Overlay.