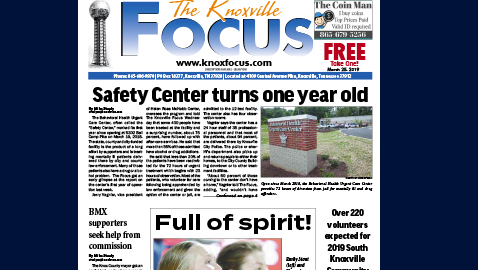 The Behavioral Health Urgent Care Center, often called the “Safety Center,” marked its first year since opening at 5302 Ball Camp Pike on March 19, 2018. The state, county and city-funded facility is the product of a long effort by supporters and is treating mentally ill patients delivered there by city and county law enforcement. Many of those patients also have a drug or alcohol problem.  The Focus got an early glimpse at the report on the center’s first year of operation last week.

Jerry Vagnier, vice president of Helen Ross McNabb Center, oversees the program and told The Knoxville Focus Wednesday that some 400 people have been treated at the facility and a surprising number, about 75 percent, have followed up with after-care services. He said that more than 55% of those admitted have alcohol or drug addictions.

He said that less than 20% of the patients have been readmitted for the 72 hours of urgent treatment which begins with 23 hours of observation. Most of the patients, who volunteer for care following being apprehended by law enforcement and given the option of the center or jail, are admitted to the 12-bed facility. The center also has four observation rooms.

Vagnier says the center has a 24 hour staff of 35 professional personnel and that most of the patients, about 94 percent, are delivered there by Knoxville City Police. The police or sheriff’s department also picks up and returns people to either their homes, to the City-County Building downtown or to other treatment facilities.

“About 60 percent of those coming to the center don’t have a home,” Vagnier told The Focus, adding, “and wouldn’t have access to treatment.”

He said that a small number of patients want to leave before the treatment is completed. They are either taken to jail or dropped off at the City-County Building.

He added that some after-treatment referrals could involve the Cherokee Health System, the Helen Ross McNabb Center, Peninsula Hospital,  Interfaith Health Clinic, or housing through the KCDC, HUD, homeless shelters or the veterans groups.

“We have very good sister agencies we work with, a really good network,” he said.

Vagnier said a first year report is being prepared and that includes consulting the city and county law enforcement agencies, the city and county governments, and the state. A final report, to the Tennessee Department of Mental Health, may be issued in May.

Vagnier described local activist Vivian Shipe as the “driving force” behind the creation of the center. She told The Focus that the information Vagnier supplied is accurate and said he has been willing to share information with her every three months. She also said she agrees “the state funds are vital” and is calling on people to contact their state and local representatives to continue funding.

“Lives are being changed and the revolving door to jail has been stopped—not a bad year. We must address the need for affordable housing to get to the next level of life,” she said.

“A wrap around case management is critical,” Shipe told The Focus, speaking of the care and after care of patients at the center.