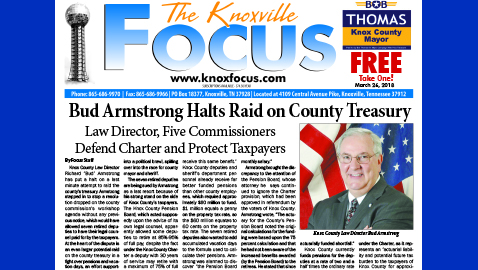 Knox County Law Director Richard “Bud” Armstrong has put a halt on a last minute attempt to raid the county’s treasury. Armstrong stepped in to stop a resolution dropped on the county commission’s workshop agenda without any previous notice, which would have allowed seven retired deputies to have their legal counsel paid for by the taxpayers. At the heart of the dispute is an even larger potential raid on the county treasury in a fight over pensions and vacation days, an effort supported by Mayor Tim Burchett, Sheriff Jimmy “JJ” Jones and Commissioner and mayoral candidate Brad Anders. The dispute has now erupted into a political brawl, spilling over into the race for county mayor and sheriff.

The seven retired deputies are being sued by Armstrong as a last resort because of his strong stand on the side of Knox County’s taxpayers. The Knox County Pension Board, which acted supposedly upon the advice of its own legal counsel, apparently allowed some deputies to retire at 85%-95% of full pay, despite the fact under the Knox County Charter a deputy with 30 years of service may retire with a maximum of 75% of full pay. As Armstrong noted in a detailed memorandum to commissioners, “The rest of Knox County and City of Knoxville employees do not receive this same benefit.” Knox County deputies and sheriff’s department personnel already receive far better funded pensions than other county employees, which required approximately $60 million to fund. $1 million equals a penny on the property tax rate, so the $60 million equates to 60 cents on the property tax rate. The seven retired deputies also wanted to add accumulated vacation days to the formula used to calculate their pensions. Armstrong was alarmed to discover “the Pension Board had been routinely awarding additional retirement income over and above the taxpayer-approved calculation based upon the officers’ average monthly salary.”

Armstrong brought the discrepancy to the attention of the Pension Board, whose attorney he  says continued to ignore the Charter provision, which had been approved in referendum by the voters of Knox County. Armstrong wrote, “The actuary for the County’s Pension Board noted the original calculations for the funding were based upon the 75 percent calculation and that he had not been aware of the increased benefits awarded (by the Pension Board) to the retirees. He stated that since he (the actuary) now knew of the increase, he now recommended the taxpayers fund an immediate $400,000 to make up some of the actuarially funded shortfall.”

Knox County currently funds pensions for the deputies at a rate of two and a half times the ordinary rate for other county employees. Bud Armstrong objected to the Pension Board allowing deputies to retire with greater benefits than allowed under the Charter, as it represents an “actuarial liability and potential future tax burden to the taxpayers of Knox County for approximately 600 uniformed officers.” Armstrong also noted, “These increases have never been submitted to Commission as required by law.” It is also highly questionable whether the county commission has the authority to overturn a provision of the Charter without an appropriate referendum by the voters, although Sheriff Jones badly wanted commission’s stamp of approval to give his resolution some sort of perceived legitimacy. The motion died due to the deadlock vote of 5-5 with Commissioner Dave Wright on vacation and absent from the meeting.

The sheriff showed little concern for the Charter, which Bud Armstrong is required to protect and defend. Of course Sheriff Jones and Jones’s hand-picked candidate to succeed him, Lee Tramel, would also likely benefit from the excessive pensions. Nor did they express the slightest concern that this could cause the pension plan to be underfunded because it goes well beyond the formula approved by the voters. Ultimately, if Sheriff Jones were to have his way, property taxes could rise another 90 cents merely to pay pensions over and above what was already approved by the voters. Three-quarters of every tax dollar spent in Knox County currently goes to just two entities: schools and the sheriff’s department.

Furious at being thwarted, Sheriff Jones had no qualms by responding with a bitter, blatantly political attack on he sheriff’s department’s official website, paid for by the taxpayers, as well as its official Facebook page. The posts attempted to rally the deputies and citizens by a call to “Back the Blue” and assailed Bud Armstrong, as well as the five members of the Knox County Commission who had the good sense to follow the Charter. Carson Dailey, John Schoonmaker, Evelyn Gill, Bob Thomas and Ed Brantley opposed the measure pushed by “JJ” Jones, Mayor Burchett and Commissioner and mayoral candidate Brad Anders. At the same time, the sheriff’s posts hailed the courage of the five county commissioners who supported a hearty feed at the trough: Brad Anders, a candidate to succeed Mayor Burchett and a Knoxville City Police Department officer, Hugh Nystrom, Randy Smith, Charles Busler, and Michele Carringer. The sheriff urged deputies and voters to “remember” those brave commissioners and bluntly pointed out the men and women in blue had the support of Brad Anders while another candidate for mayor, Bob Thomas, had opposed them. Both Anders and Thomas are vying for the Republican nomination for county mayor with businessman and former wrestling star Glenn Jacobs.

Bud Armstrong refused to consider allowing the seven retired deputies to have lawyers paid for by the taxpayers and it is hard to fault the law director’s impeccable logic. By the same token, why couldn’t any former county employee insist that they were entitled to legal representation paid for by the taxpayers? The county’s policy has been to only provide legal representation to retired employees in the instance when a suit involved an incident that occurred while they were active employees and not always then. Neither the sheriff’s department, the mayor, nor the pension board seemed to be worried about setting a costly precedent by having to provide legal representation for all retired county employees. Mayor Burchett, busily engaged in his congressional campaign, evidently did not wish to offend Sheriff Jones and did not weigh in during last Monday’s debate and vote and seemed content to be a spectator. Bud Armstong has tried everything to resolve this matter without going to court. Jones and Burchett left Bud Armstrong no alternative but to ask for a lawsuit to be filed on behalf of Knox County’s taxpayers. Also, Burchett and the pension board had yet another alternative available to them outside of a lawsuit had they merely wished to follow the funding formula as set out by the Charter amendment approved by the voters.

The only  solution for Jones and Burchett seemed to be ramming through a last minute resolution giving the seven retired deputies legal representation paid for by the taxpayers to protect pension gains they weren’t entitled to in the first place. With Mayor Burchett looking the other way, Jones went all in to get his way on the county commission until he ran into a man that would not be bullied, Bud Armstrong. Armstrong cannot be intimidated, coerced or moved by mere politics. Despite Jones’ call for folks to remember those who did not back the blue, voters may very well remember something else entirely.

Thomas went on to say, “We have a process to change the charter. If Sheriff Jones and Mayor Burchett want to increase deputies pensions over 75% of their salary then follow the process, have a referendum and let the people of Knox County vote on it.”