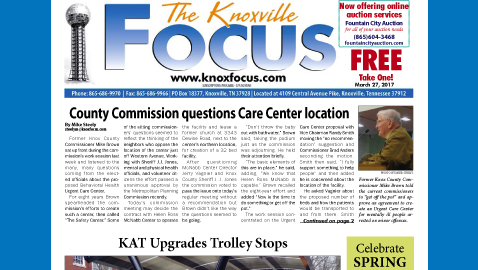 Former Knox County Commissioner Mike Brown sat up front during the commission’s work session last week and listened to the many, many questions coming from the elected officials about the proposed Behavioral Health Urgent Care Center.

For eight years Brown spearheaded the commission’s efforts to create such a center, then called “The Safety Center.” Some of the sitting commissioners’ questions seemed to reflect the thinking of the neighbors who oppose the location of the center just off Western Avenue. Working with Sheriff J.J. Jones, mental and physical health officials, and volunteer citizens the effort passed a unanimous approval by the Metropolitan Planning Commission recently.

Today’s commission meeting may decide the contract with Helen Ross McNabb Center to operate the facility and lease a former church at 3343 Dewine Road, next to the center’s northern location, for creation of a 32 bed facility.

After questioning McNabb Center Director Jerry Vagnier and Knox County Sheriff J. J. Jones the commission voted to pass the issue onto today’s regular meeting without a recommendation but Brown didn’t like the way the questions seemed to be going.

“Don’t throw the baby out with bathwater,” Brown said, taking the podium just as the commission was adjourning. He held their attention briefly.

“The basic elements of this are in place,” he said, adding, “We know that Helen Ross McNabb is capable.” Brown recalled the eight-year effort and added “Now is the time to do something or get off the pot.”

The work session concentrated on the Urgent Care Center proposal with Vice Chairman Randy Smith moving the “no recommendation” suggestion and Commissioner Brad Anders seconding the motion. Smith then said, “I fully support something to help people” and then added he is concerned about the location of the facility.

He asked Vagnier about the proposed number of beds and how the patients would be transported to and from there. Smith suggested the agreement include “something in writing” from the sheriff’s department about their involvement.

Vagnier replied that plans call for 16 “crisis” beds and 16 immediate care beds, plus 8 detox beds. The director than backtracked and said the number of beds could be changed “If that’s the desire, we don’t have to have them under the same roof.”

“My concerns haven’t been answered yet,” Commissioner Brad Anders said, adding, “I’m for a facility but we’ve got to talk more about detox.”  He asked Vagnier if the facility would simply be a “dry dock” for people picked up by law enforcement and said there is currently no policy in place.

Vagnier countered that patients being brought in by the police or sheriff’s department would be observed for the first 24 hours to see if they are going to benefit from a 72-hour stay.

Law Director Bud Armstrong said that beds for detox are not currently part of the proposed contract between the county and Helen Ross McNabb.

Commissioner Hugh Nystrom asked about the training of law enforcement to deal with mentally ill persons and Vagnier said the center currently provides 40 hours of training for law enforcement in East Tennessee. Sheriff J.J. Jones said that 45 to 50 of the deputies are trained and that the Knoxville Police Department has more officers that have received the training.

“My goal as sheriff is not to provide a ’drunk tank.’ My interest is to help people who can be put back successfully in our county.”

Commissioner Bob Thomas asked what would have happened if Helen Ross McNabb had not responded to the county’s request for bids and then asked Vagnier if the proposed facility will “fit into the community and look nice.”

The director responded that it will “be a good neighbor” and promised landscaping and other improvements. He said the center will have 24-7 care, 365 days a year and provide food.

Commissioner Schoonmaker asked about people apprehended who have infectious diseases and the sheriff replied that such a person “would not be a candidate” for the facility and added, “We have a facility for that,” referring to the county jail.

Asked by Commissioner Evelyn Gill about following patients after they are treated there for 72 hours Vagnier said they will be tracked, community resources provided, and be taken to another facility, to their home, or taken downtown and released.

Vagnier said that case managers would be provided as well as housing, benefits and medication.

Smith asked about how or when people picked up and placed in the facility would be charged with an offense. Randy Nichols of the sheriff’s department said the people could be picked up and held “for their own wellbeing” and law enforcement officers would not need to charge them with anything.

Smith questioned whether eight detox beds could treat the 900 people in the county waiting for services. He asked Vagnier if it is possible to add on to the current treatment facility next door to the proposed property and Vagnier said the topography there could not permit expansion. Smith then suggested that a buffer could be built to separate the facility from the neighborhood. Vagnier said a new entrance from Ball Camp road is being considered.

Law Director Armstrong said the agreement would run for three years with six possible renewals for a total of 20 years.

Commissioner Ed Brantley said that all of the questions and answers being posed will probably be repeated during tonight’s regular meeting.

Chairman David Wright said he wanted all the questions to be discussed during the work session in preparation for the regular session.

“I fully intend to have an up or down vote Monday,” Wright said.