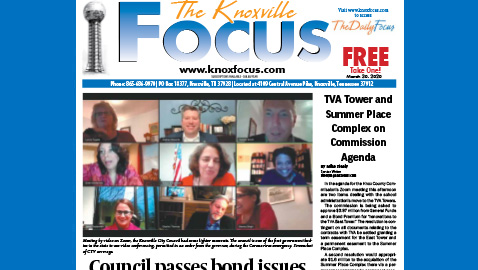 “It went pretty well,” commented Mayor Indya Kincannon after the two-hour meeting. CTV telecast the session with images of the council members. The test of the system earlier in the week apparently helped iron out difficulties. Each council member responded from their homes and each could see the other members.

Roberto, who chairs the city’s Beer Board, cleared the beer delivery with the city attorney and said the resolution will “help support our local vendors and keep folks employed.” Vice Mayor Gwen McKenzie seconded the motion to add it to the agenda as an emergency ordinance and the matter passed unanimously.

Councilwoman Amelia Parker also offered a resolution that passed, supporting the city’s Coronavirus effort and authorizing the use of emergency funds when needed including possible rent subsidies. The funds could go to the Community Action Commission or other agencies as needed.

The meeting was longer than usual as each matter on the agenda needed a roll call vote but the council worked pretty swiftly to approve the issuance of bonds.

Appointments of citizens to various committees were moved to the “consent” list of items to save time and the original agenda was shortened for the meeting.

The second and final reading dealing with parking of buses in I-MU districts was approved. Also approved on second reading was requiring notices of Board of Zoning Appeals meetings to be published and a new section added to the City Code for “Nonconforming Lots of Record.”

The council also approved an In Lieu of Tax Payments for KUB and approved hiring Duracap Asphalt for paving at the Impound Building.

Other comments and suggestions included extending the free KAT service beyond the current emergency and the possibility of using the “Honor our Troops” name later on another location since the street between Howard Baker Jr. Avenue and Historic Preservation Drive is being closed.

Mayor Kincannon reminded the council that Engineering Director Jim Hagerman and Deputy Mayor Dr. Bill Lyons are leaving city service but the mayor requested  Lyons to stay on during the emergency.

Several council members lamented the lack of public forum during the meeting. Anyone wishing to comment may contact the City Recorder at 865-215-2075.

Community Television’s live coverage of the meeting ended with a shot of the dark and empty main assembly room in the City-County Building where the council would normally meet.