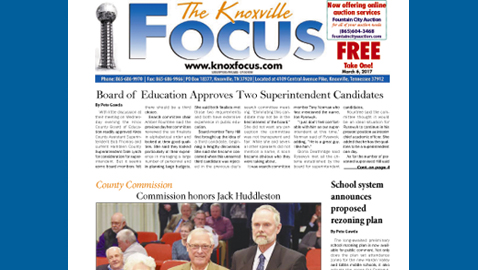 With little discussion at their meeting on Wednesday evening the Knox County Board of Education readily approved Knox County Assistant Superintendent Bob Thomas and current Hamblen County Superintendent Dale Lynch for consideration for superintendent. But it seems some board members felt there should be a third choice.

Search committee chair Amber Rountree said the previous day her committee reviewed the six finalists in alphabetical order and looked at their good qualities. She said they looked particularly at their experience in managing a large number of personnel and in planning large budgets. She said both finalists met those two requirements and both have extensive experience in public education.

Board member Terry Hill first brought up the idea of a third candidate, beginning a lengthy discussion. She said she became concerned when this unnamed third candidate was rejected in the previous day’s search committee meeting. “Eliminating this candidate may not be in the best interest of the board.” She did not want any perception the committee was not transparent and fair. While she and several other speakers did not mention a name, it soon became obvious who they were taking about.

“I just don’t feel comfortable with him as our superintendent at this time,” Norman said of Rysewyk, adding, “He is a great guy. I like him.”

Gloria Deathridge said Rysewyk met all the criteria established by the board for superintendent candidates.

Rountree said the committee thought it would be an ideal situation for Rysewyk to continue in his present position as interim chief academic officer. She added that he has the qualities to be a superintendent one day.

As for the number of personnel supervised Hill said that Lynch actually supervised fewer personnel than Rysewyk since Hamblen County has fewer students than Knox County.

“It sounds like people have made up their minds who they want and adding a third candidate is a moot point,” asserted board member Lynn Fugate.” “I would like for us not to be so firm in our opinions at this point.”

The motion to add Rysewyk to the list of nominees was defeated by a vote of 4 yes votes and 5 no. Deathridge, Horn, Fugate and Hill voted in favor of considering Rysewyk.

Turning to other business, a number of miscellaneous amended board policies passed their first reading and other amended policies went into effect due to their approval on the second reading.

During the public forum several teachers, citizens and students spoke against proposed cuts to personnel at some of the schools. Each speaker drew a round of applause from the audience.

Interim Superintendent Buzz Thomas responded by stating that the school system has a staffing formula and it is not fun to tell a school they will lose personnel. He said the formula was applied equally to all schools.

“I do want you to know we are hearing you and pushing resources into the schools that need them,” Thomas said.