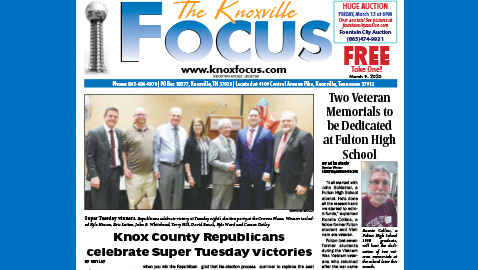 Buuck came one step closer to replacing the term-limited Bud Armstrong as Knox County Law Director as he defeated Cathy Quist Shanks in the Republican Primary on Super Tuesday.

Now, Buuck faces a challenge from Jackson Fenner. Fenner, an Independent, recently entered the race but Buuck is confident that he can prevail in the August general election.

“I’ll have to face an Independent who has thrown his hat into the race,” said Buuck, who got 60% of the primary vote against Quist Shanks. “But I’m not really worried about it.

“I’ll obviously have to respond to his campaign, but usually when you win the Republican primary in Knox County, you usually win the general election.”

Upon accepting the party’s nomination, Buuck said that he would be “the people’s lawyer,” and added, “I look forward to representing the people of Knox County.”

He has also vowed to carry on the work started by Armstrong, under whom he served in the Knox County Law Director’s Office.

In other races, John R. Whitehead was re-elected to serve as Knox County’s Property Assessor. He soundly defeated Tina Marshall, picking up more than 71% of the vote.

He’ll run unopposed in August, but said that he was glad that his election process has finally come to an end.

“I’m excited,” said Whitehead, who will serve a fourth term as property assessor. “I’m glad we can all get back to living our lives again. I’m glad that we can all sleep at night again.

“And I’m glad that I won’t have to work another pool.”

Dailey (District 9), Hill (District 6) and Beeler (District 8), who did not attend Tuesday night’s election party at the Crowne Plaza, will all be unopposed again in August.

Rosenberg will face Democrat Courtney Durrett this summer to replace the seat being vacated by the term-limited Michele Carringer.

In District 5, John Schoonmaker, the incumbent, edged Clayton Wood in the primary. Schoonmaker will face Democrat Kimberly Peterson in August.

In the District 4 race, Kyle Ward beat Scott Broyles in the primary and he’ll face Todd Frommeyer in the general election.

Kyle Hixson will be the next Division II Criminal Court Judge as he defeated Wesley Stone in the primary.

Eric Lutton defeated Rhonda Lee in the primary and will face Sherif Guindi, an Independent, in August for the Public Defender office.