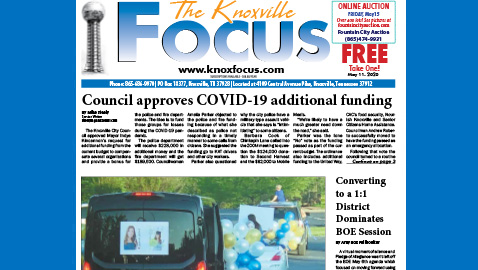 The Knoxville City Council approved Mayor Indya Kincannon’s request for additional funding from the current budget to compensate several organizations and provide a bonus for the police and fire departments. The idea is to fund those groups for losses during the COVID-19 pandemic.

The police department will receive $228,000 in additional money and the fire department will get $189,500. Councilwoman Amelia Parker objected to the police and fire funding because of what she described as police not responding in a timely manner to some calls from citizens. She suggested the funding go to KAT drivers and other city workers.

Parker also questioned why the city police have a military-type assault vehicle that she says is “intimidating” to some citizens.

Barbara Cook of Chinkapin Lane called into the ZOOM meeting to question the $124,000 donation to Second Harvest and the $62,000 to Mobile Meals.

“We’re likely to have a much greater need down the road,” she said.

Parker was the lone “No” vote as the funding passed as part of the current budget. The ordinance also includes additional funding to the United Way, CAC’s food security, Nourish Knoxville and Senior Citizens Home Assistance. Councilman Andrew Roberto successfully moved to have the funding passed as an emergency allocation.

Following that vote the council turned to a routine vote on the first reading of the mayor’s proposed budget, which must be passed by the end of June. Mayor Kincannon said that council will meet on May 14th and 15th for budget hearings.

Councilwoman Seema Singh asked why a successful first vote on the budget is necessary since the charter says it must pass. Council Attorney Rob Frost replied that the city charter prescribes the vote take place. In between the first vote and the final second vote the council and the mayor will discuss next year’s budget. Kincannon made a point of stating there’s no new tax increase.

Parker voted “No” in the 8-1 passage on first reading.

The vote was unanimous on increasing the funding to Barge Design Solutions, Inc. for a $15,100 increase for the First Greek Greenway and Broadway Streetscapes Project.

In other action the council approved Kincannon’s appointments of Sandra Korbelik and Karyn Adams to the Knoxville-Knox County Planning Commission. The council also approved an appeal of a Board of Zoning Appeals denial of a driveway entrance along Sevierville Pike and allowed building and site elements and the Cal Johnson Building to encroach on Fire Street Alley.

The mayor was authorized to apply for four different state and federal grants for the Knoxville Area Transit and approved to sign an agreement with Goodwill Industries for recycling maintenance.

Also approved was applying to the federal government for a firefighters grant for personal protective equipment.