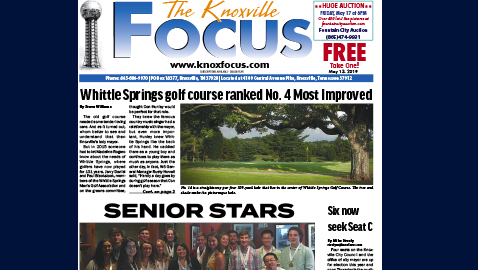 The old golf course needed some tender loving care. And as it turned out, whom better to see and understand that than Knoxville’s lady mayor.

But in 2015 someone had to let Madeline Rogero know about the needs of Whittle Springs, where golfers have now played for 101 years. Jerry Daniel and Paul Blackstock, members of the Whittle Springs Men’s Golf Association and on the greens committee, thought Con Hunley would be perfect for that role.

They knew the famous country music singer had a relationship with the mayor, but even more important, Hunley knew Whittle Springs like the back of his hand. He caddied there as a young boy and continues to play there as much as anyone. Just the other day, in fact, WS General Manager Rusty Howell said, “Hardly a day goes by during golf season that Con doesn’t play here.”

So Hunley had that “sit down” with Rogero and came away from it very impressed with the mayor’s interest in the golf course and how quickly she got the ball rolling to improve it.

The announcement came in February that Whittle Springs was No. 4 in Golf Advisor’s rankings of most improved golf courses in the United States in 2018.

The climb to that lofty position started after the course’s greens were damaged and ultimately lost in 2014. Billy Casper Golf, a golf management company, was in operation at Whittle Springs at that time. With the help of insurance and the city, the greens were replaced with Champion Bermuda (a weather and disease resistant grass).

“That was one of the best hires it made,” said Hunley. “Brad was a local guy who had worked for several courses in Knoxville and surrounding areas. With him in that position, Whittle Springs improved unbelievably, and it’s the best the course has been to my knowledge in 45 to 50 years.”

However, there were still areas where the course needed improvement and that led to Hunley’s meeting with Rogero.

Hunley found it to be nothing like past meetings he’d had concerning the golf course.

“I have gone to past administrations and tried to get some help and we never really felt like we got what we needed,” he recalled. “When I went in and sat down with Mayor Rogero, she brought in a yellow legal pad, so I knew this was serious to her, and she had to know for me to try to set up an appointment with her, that I was serious about it.

“What I figured might be a 15 or 20 minute meeting turned into about an hour long meeting. We addressed a number of issues that we felt like would help improve the golfing experience for people who wanted to play the course. She was very interested in upgrading it.”

Rogero particularly liked how the course could be set up short – ideal for juniors, seniors and women – or it could be long and more challenging, said Hunley. And she went right to work on it and got with Joe Walsh, who was then the Director of Knoxville’s Parks & Recreation.

“The next thing I know all the old cart paths were being dug up and replaced within a matter of 30 to 60 days,” remembered Hunley. “She allotted the money to take up the old trails and put down fresh asphalt. There were brand new trails everywhere.”

Not long after the meeting with Hunley, Mayor Rogero set up a meeting with Howell and Billy Casper Golf representatives to come out and look the course over.

“She really took a hands-on approach to see the needs and condition of the course,” said Hunley.

“Along with her came Joe Walsh, greens committee members and City Councilman George Wallace, who also is Chair of the City’s Golf Course Advisory Committee. All of them were extremely helpful and willing to do whatever they could, as far as the city was concerned, to make improvements.”

But Hunley emphasized Mayor Rogero “spearheaded” the city’s improvements and wanted to recognize that before her term as mayor ends this year.

“Mayor Rogero, the greens committee, the Parks & Recreation Department and Brad Courteau, along with Billy Casper Golf deserve credit for what we have, but Mayor Rogero first and foremost,” said Hunley. “Without her we don’t have it.”

For many years, however, the City of Knoxville’s oldest municipal golf course was ignored, said Hunley. So long as it paid for itself, various political administrations were not worried about it. Through the years, the golf course deteriorated.

Despite having a lot of natural underground springs, the biggest problem was the course couldn’t get adequate water and the city didn’t like having to pay for it.

In late 2011, about the time Rogero became the first woman to be elected Knoxville’s mayor, the city looked into building a pond to help with the irrigation. The object was to have a retention pond to hold water that could be used in the summer months.

Hunley today calls Whittle Springs “a little jewel.” And he says more and more folks are finding that out as they come and play the course, whether it be tournament rounds or just regular play.

Since its greens were replaced with Champion Bermuda, the course and tees have been sprigged with Bermuda.

In 2017, the city allotted money to buy and upgrade mowers for the greens, fairways and roughs.

A year ago, a fleet of 60 new golf carts were purchased and started motoring over the course’s three-year-old new cart paths – a combined investment of almost $700,000 since 2015.

And today the pond is full of rainwater and serves the course well, said Howell.

“Billy Casper Golf and the City of Knoxville have established a mutual commitment to improving the golf course and elevating the customer experience,” says Howell. “We look forward to continue being a positive steward for the greater Knoxville community for years to come.”

The 114-acre course in northeast Knoxville was built by Whittle Springs Resort Hotel in 1918, and then sold to the City of Knoxville. After the city made changes to the course, the scenic layout began hosting the Knoxville City Amateur Championship in the 1930s and continues to host the prestigious event. Whether playing from the par-71, 4,781-yard front tees or the par-70, 5,729-yard back tees, Whittle Springs offers multiple ways to enjoy the charming course.

UPDATE: After this story was compiled, we (the Whittle Springs Mens Golf Association) are sad to say, Brad Courteau was hired away by Avalon Golf Club in West Knoxville. Rusty Howell has just announced that his replacement will be Alex Hale from within the Billy Casper Golf organization. Mr. Howell assures that he, Hale, is very knowledgeable about Champion Bermuda greens and overall course maintenance.