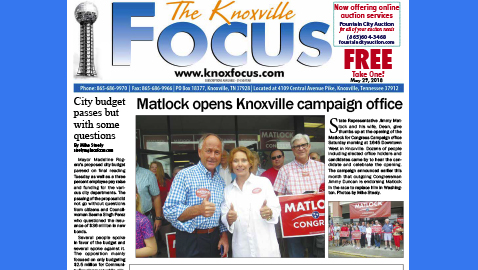 City budget passes but with some questions

Mayor Madeline Rogero’s proposed city budget passed on final reading Tuesday as well as a three percent employee pay raise and funding for the various city departments. The passing of the proposal did not go without questions from citizens and Councilwoman Seema Singh Perez who questioned the issuance of $36 million in new bonds.

Several people spoke in favor of the budget and several spoke against it. The opposition mainly focused on only budgeting $2.5 million for Community Development while allocating $10 million to create a gateway entrance to the Urban Wilderness at the end of James White Parkway.

Perez asked if each item would come back before the council for approval. Finance Director Jim York said that the city will issue $55 million in new debt bonds next year to include funds for a new “Safety Center” for police and fire departments on Knoxville College property and $9 million for renovations at the Civic Coliseum and Auditorium.

Mayor Madeline Rogero said the funding won’t all be spent in the coming year and the approval allows the city to get started on those projects.

“That’s a great deal of money, I just wanted to confirm that we will be involved,” Perez said.

“There are a lot of steps along the way,” York said.

Perez joined the other council members in approving the budget once she was assured that most of the spending will come back to the council for approval.

David Brace, chief operation officer, explained that the Sequoyah Hills neighborhood has raised $100,000 for the maintenance and upkeep of Talahi Park and that the fountain there is owned by the city. Perez voted along with the other members to approve the donation of $10,000.

In other action the city approved Rogero’s naming of former mayor and city councilman Daniel T. Brown to the Public Building Authority and George Anna Yarbro to the Board of Equalization.

The council also gave final approval to $20,000 for development of the Everly Brothers Park and approved various zoning requests. Also approved was $135,050 for repairs to the Coliseum Garage “C” and janitorial services to various recreation centers.