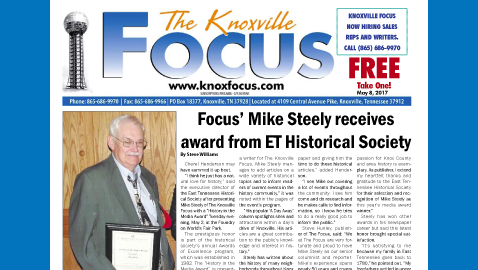 Cherel Henderson may have summed it up best.

“I think he just has a natural love for history,” said the executive director of the East Tennessee Historical Society after presenting Mike Steely of The Knoxville Focus with a “History in the Media Award” Tuesday evening, May 2, at the Foundry on World’s Fair Park.

The prestigious honor is part of the historical society’s annual Awards of Excellence program, which was established in 1982. The “History in the Media Award” is presented to someone in the field of broadcast, print media or Internet for outstanding contributions to the promotion of the region’s history.

“In his busy career as a writer for The Knoxville Focus, Mike Steely manages to add articles on a wide variety of historical topics and to inform readers of current events in the history community,” it was noted within the pages of the event’s program.

“His popular ‘A Day Away’ column spotlights sites and attractions within a day’s drive of Knoxville. His articles are a great contribution to the public’s knowledge and interest in history.”

Steely has written about the history of many neighborhoods throughout Knox County and also stories about surrounding counties.

“The Knoxville Focus deserves a lot of credit for giving the space in the paper and giving him the time to do these historical articles,” added Henderson.

“I see Mike out covering a lot of events throughout the community. I see him come and do research and he makes calls to find information, so I know he tries to do a really good job to inform the public.”

Steve Hunley, publisher of The Focus, said: “We at The Focus are very fortunate and proud to have Mike Steely as our senior columnist and reporter. Mike’s experience spans nearly 50 years and covers all roles of the newspaper business including owner, publisher, reporter, columnist and sales. Mike’s integrity and dedication are second to none. His passion for Knox County and area history is exemplary. As publisher, I extend my heartfelt thanks and gratitude to the East Tennessee Historical Society for their selection and recognition of Mike Steely as this year’s media award winner.”

Steely has won other awards in his newspaper career but said this latest honor brought special satisfaction.

“It’s satisfying to me because my family in East Tennessee goes back to 1780,” he pointed out. “My forefathers settled in upper Cumberland County when it was still considered Kentucky. I’ve been interested in history ever since my grandmother started telling me family stories, so to be recognized for my history writing, it’s a great thrill.”

Steely was a journalist when he served in the United States Coast Guard. He went to East Tennessee State University. He also has worked at The Jellico Advance Sentinel, The Kingsport Times-News and The Morristown Citizen Tribune.

Secretary of State Tre Hargett, the chief executive officer of the Tennessee Department of State, which includes the Library and Archives, was the program’s featured speaker.

In addition to addressing how the Tennessee State Library and Archives (TSLA) houses the collective memory of Tennesseans, Hargett pointed out Governor Bill Haslam’s recent proposed budget to the Legislature included the first half of necessary funding for a new TSLA facility.

Hargett said if this year’s budget is approved and the rest of the funding comes in next year’s budget, a new TSLA facility could be built in 18-plus months.