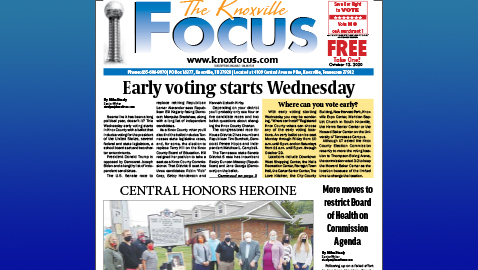 Seems like it has been a long political year, doesn’t it? This Wednesday early voting starts in Knox County with a ballot that includes voting for the president of the United States, several federal and state legislators, a school board seat and two charter amendments.

President Donald Trump is opposed by Democrat Joseph Biden and a lengthy list of independent candidates.

As a Knox County voter you’ll also find the ballot includes Tennessee state legislative races, and, for some, the election to replace Terry Hill on the Knox County Board of Education. Hill resigned her position to take a seat as a Knox County Commissioner. That District 6 seat has three candidates: Robin “Rob” Gray, Betsy Henderson and Hannah Lizbeth Kirby.

Depending on your district you’ll probably only see four or five candidate races and two ballot questions about changing the Knox County Charter.

Depending on where a voter lives there are various races for the Tennessee state House.

District 15 voters will choose a new state legislator. Sam McKenzie is opposed by Independent Troy B. Jones. The winner will replace state Representative Rick Staples, who lost to McKenzie in the Democratic Primary.

District 18 has a contest for a new state representative. Representative Martin Daniel also chose not to seek the office again. Competing for the office are Republican Eddie Mannis and Democrat Virginia Couch.

In District 19 state Representative David Wright (Republican) has no opposition.

Also on the ballot is a Knox County Charter amendment concerning the future of the Knox County Law Director.

Shall the Knox County Charter be amended to take away from the people the ability to vote for the Knox County Law Director by changing this elected office to an office appointed by the Mayor, subject to Commission approval, and subject to removal by majority vote plus one (1) of Commission for cause and reduce the duties of the office by allowing the Commission to hire its own attorney and allowing the School Board to hire its own attorney, effective September 1, 2024?

That question requires a “Yes” or “No” vote and could change the independence of the law director substantially. It’s the third time citizens are being asked the question and in both incidents voters voted overwhelmingly to elect the position instead of letting it be appointed.

Shall Section 3.03 M of the Knox County Charter be amended by deleting said section in its entirety and by substituting therefore the following:

That question is also a “Yes” or “No” decision for voters.