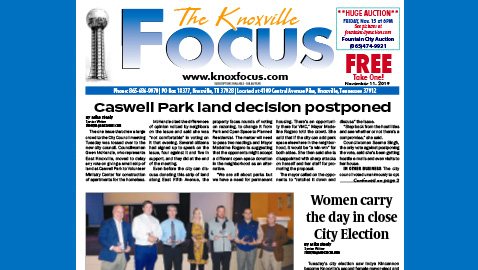 The one issue that drew a large crowd to the City Council meeting Tuesday was tossed over to the new city council. Councilwoman Gwen McKenzie, who represents East Knoxville, moved to delay any vote on giving a small strip of land at Caswell Park to Volunteer Ministry Center for construction of apartments for the homeless.

McKenzie cited the differences of opinion voiced by neighbors on the issue and said she was “not comfortable” in voting on it that evening. Several citizens had signed up to speak on the issue, four against it and five in support, and they did at the end of the meeting.

Even before the city can discuss donating this strip of land along East Fifth Avenue, the property faces rounds of voting on rezoning, to change it from Park and Open Space to Planned Residential.  The matter will need to pass two readings and Mayor Madeline Rogero is suggesting that the opponents might accept a different open space donation in the neighborhood as an alternative.

“We are all about parks but we have a need for permanent housing. There’s an opportunity there for VMC,” Mayor Madeline Rogero told the crowd. She said that if the city can add park space elsewhere in the neighborhood, it would be “a win-win” for both sides. She then said she is disappointed with sharp attacks on herself and her staff for promoting the proposal.

The mayor called on the opponents to “ratchet it down and discuss” the issue.

“Step back from the hostilities and see whether or not there’s a compromise,” she said.

Councilwoman Seema Singh, the only vote against postponing the vote, said she’s been getting hostile e-mails and even visits to her house.

IN OTHER BUSINESS The city council voted unanimously to opt into a state program that permits the city to accept refugees for resettlement. Under President Trump the states must agree to the program, in place in Knoxville since 1982, and the council voted to ask Tennessee Governor Bill Lee to take part in the national program.

Mayor Rogero said that 59 different local companies have hired refugees and added that those foreign immigrants have “served the community well.”

A residential lot at 429 Forestal Drive was rezoned to Office on a request from Michael B. Collingwood and a property on Warrick Avenue was rezoned to Planned Residential to permit the building of 4.2 units per acre.

White Properties II, LLC asked and received a change on Callahan Drive from C-5 (Commercial) to C-4. David Varner was the applicant.

The change at 4817 Chambliss Avenue to Office from Residential got a split vote of 7-2 and passed.

The memory of Charles Edward Gaut Jr. was honored and the mayor was authorized to sign contracts with H. T. Hackney for a traffic crosswalk signal and Design Construction Services for the 2020 sidewalk replacement project. She was also approved to contract with Vaughn & Milton for right of way acquisition, relocation and related services for the Pleasant Ridge Road Phase II program.

Two street name changes were referred to the Property Naming Committee and the Chapman Highway Implementation Plan was adopted as well as the South City Sector Plan.

A change of zoning from Office to Neighborhood Commercial was debated and postponed on a motion by Councilman Andrew Roberto. The change, for Osprey Point Lane, is opposed by citizens living at the end of the street. Two stores are planned there.