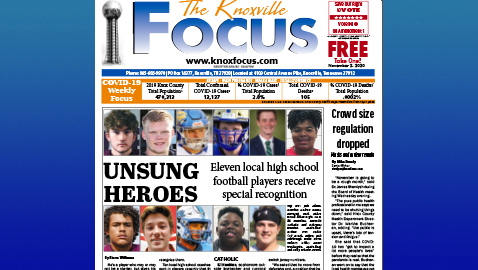 He’s a player who may or may not be a starter, but gives his all in every practice and every game.

He’s a player who is willing to sacrifice and play any position to make his team better.

He’s a player all teammates and coaches respect and admire because he’s a team guy first and foremost.

Most likely, his name has not been in a headline this season or announced on radio or TV. But he has stood out repeatedly in the background.

We call them Unsung Heroes.

“We have a young man by the name of Zach Fisher that would be great for this,” said Defensive Coordinator Lee Warren.

“He’s a senior middle linebacker. He has great grades and he’s always leading by example, staying positive, and is the No. 1 cheerleader when he’s not on the field. He does anything he’s asked to do, and he’s constantly lifting his teammates up.”

“Ethan embodies what we are trying to build in the young men of CAK. Two seasons ago, we asked Ethan to switch from offense to defense, and to also switch jersey numbers.

“If you know football, you know that playing on the offensive line is a unique skill set and not as ‘easy as it looks.’

“Not only did Ethan accept this role change; he embraced it and dedicated himself to mastering it.

“While Ethan’s position change has been a significant contributor to our recent success (just ask running back JD Dunn!), more so, his attitude and selflessness has been a fantastic example of what we want CAK football to be about –putting what’s best for others before what seems best for you as an individual.”

Coach Mozingo added: “Ethan (6-2, 194) is a long snapper and offensive tackle. He’s very good at both. His GPA is 4.34 and he has applied to the Virginia Military Institute and the Army ROTC Program.”

“Storm Tolliver (senior offensive lineman) is a young man who has been committed to football all four years. He has worked hard on and off the field to get where he is today. He works a job when he is not at football, while still maintaining good grades.

“He always puts the team first and is willing to play wherever we need him. He is undersized as an o-lineman but plays bigger because of his effort and heart.

“Storm has overcome a lot in his life and will be successful in whatever he does in life. He is a true Gibbs Eagle and is everything we want in our program.” – Head Coach Brad Turner

“Zackeyous Houston is a sophomore offensive lineman that will play anything the coaches ask. He always knows the job regardless of what position he is asked to play.

“Amari Washington is a sophomore tight end who does the little things at practice. He always makes sure things are taken care of in the locker room. Very unselfish.”

“Josh Scarbrough is a senior receiver who NEVER misses and does scout team every day, making his teammates better,” said Head Coach Scott Cummings. “A true TEAM player that never complains and will do whatever is asked of him. He has great grades with a 3.8 GPA.”

“Senior Jack Adams is a valuable member of our football program and contributes to the team in multiple facets. His contributions include but are not limited to playing linebacker, special teams and assisting on scout team when needed.

“Not a lot of media attention is given to quiet, hardworking young men like Jack, but he is a leader for our team on and off the field.” – Head Coach Morgan Shinlever

“Cedric (CJ) Roach is our Swiss army knife,” said Head Coach Rob Black. “He’s a senior and plays a little bit of everything for us.

“CJ is on all special teams. He is such a smart player and a great teammate.

“He is not a guy that will get his name in the headlines, but he is a guy that we can count on in so many ways.”

“Andrew Doane is a senior linebacker and defensive lineman. Andrew was a starting linebacker last season. Due to numerous injuries he has had to overcome, he keeps coming back and practicing anywhere we need him. He has kept his 4.0 GPA through all this. He is respected by his coaches and teammates because of his determination and his love of the game of football.” – Head Coach Eddie Courtney

“Colby Wheeler is the epitome of the type of person, and player, who we want to represent the Powell Football program.

“Colby’s commitment to high performance in the classroom, in the community and on the football field reflects his extremely high character.

“This young man has come to work early everyday this year, given his all and made everyone around him better from his position on the offensive line.” – Powell Head Coach Matt Lowe