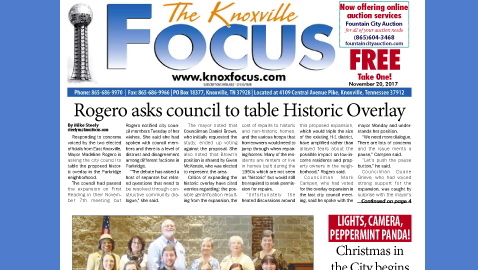 Responding to concerns voiced by the two elected officials from East Knoxville, Mayor Madeline Rogero is asking the city council to table the proposed historic overlay in the Parkridge neighborhood.

The council had passed the expansion on First Reading in their November 7th meeting but Rogero notified city council members Tuesday of her wishes. She said she had spoken with council members and there is a level of distrust and disagreement among different factions in Parkridge.

“The debate has raised a host of separate but related questions that need to be resolved through constructive community dialogue,” she said.

The mayor noted that Councilman Daniel Brown, who initially requested the study, ended up voting against the proposal. She also noted that Brown’s position is shared by Gwen McKenzie, who was elected to represent the area.

Critics of expanding the historic overlay have cited worries regarding: the possible gentrification resulting from the expansion, the cost of repairs to historic and non-historic homes, and the various hoops that homeowners would need to jump through when repairing homes. Many of the residents are renters or live in homes built during the 1950s which are not seen as “historic” but would still be required to seek permission for repairs.

“Unfortunately the heated discussions around this proposed expansion, which would triple the size of the existing H-1 district, have amplified rather than allayed fears about the possible impact on low-income residents and property owners in the neighborhood,” Rogero said.

Councilman Mark Campen, who had voted for the overlay expansion in the last city council meeting, said he spoke with the mayor Monday and understands her position.

“We need more dialogue. There are lots of concerns and the issue merits a pause,” Campen said.

Councilman Duane Grieve, who had voiced strong support for the expansion, was caught by surprise with the mayor’s request.

“It’s been studied enough but I really don’t have a comment at this time,” he said.

“It was a difficult issue and the goals on both sides were worthy causes,” said Councilman Marshall Stair. He voted for the expansion but added that to “preserve but not displace low income” are the goals.

“I hope we can achieve both of these goals,” Stair said.

“This is a council issue, not a mayor’s issue and for her to send out that press release is premature,” Councilwoman Brenda Palmer told the Focus.

“It’s always uncomfortable when it comes to land use,” said Councilman George Wallace, adding, “There’s no way to make everyone happy.”

“I think it has merit and I supported it,” he said of the expansion, adding that postponing a decision might better than tabling it.

“I don’t want to kill it. I think we can get it done in six months or so,” Wallace said, adding that the Office of Neighborhoods should get involved and resolve some of the questions about the expansion. Wallace also said he will be absent at Tuesday’s regular council meeting. The vote was 6-3 for the expansion and the final vote, with Wallace out, could be 5 to 3 to table the proposal.

“I’m comfortable with it,” Councilman Finbarr Saunders said of the mayor’s request.

“I’d rather table it,” he said, adding that the situation in the Parkridge neighborhood “is greater than just historic.”

Voting against the expansion, for varying reasons, were Daniel Brown, Nick Pavlis and Nick Della Volpe.

“We need to work together toward identifying a common vision and common goals. Historic preservation brings many benefits to a community and it will remain an important priority in that conversation,” the mayor said.

She also noted that when an item is tabled it can be added to a future agenda with a majority vote by council and adequate public notice.