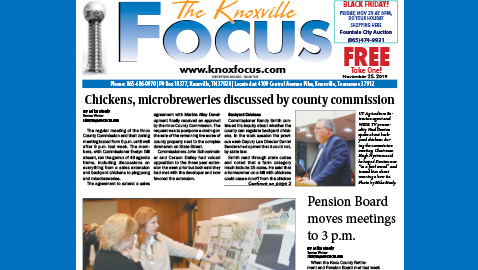 The regular meeting of the Knox County Commission and their zoning meeting lasted from 5 p.m. until well after 9 p.m. last week. The members, with Commissioner Evelyn Gill absent, ran the gamut of 46 agenda items, including discussions on everything from a sales extension and backyard chickens to ping pong and microbreweries.

The agreement to extend a sales agreement with Marble Alley Development finally received an approval by the Knox County Commission. The request was to postpone a closing on the sale of the remaining five acres of county property next to the complex downtown on State Street.

Commissioners John Schoonmaker and Carson Dailey had voiced opposition to the three year extension the week prior but both said they had met with the developer and now favored the extension.

Commissioner Randy Smith continued his inquiry about whether the county can regulate backyard chickens. In the work session the previous week Deputy Law Director Daniel Sanders had opined that it could not, by state law.

Smith read through state codes and noted that a farm category much include 15 acres. He said that a homeowner on a hill with chickens could cause runoff from the chicken droppings, calling that a nuisance.

UT Agriculture Extension agent Neal Denton was called to speak and said that raising chicken at home “fast food” for some families before that industry developed. He said that nuisance and water quality were a separate issue.

“I caution you to regulate poultry in the backyard, a lot of that is for personal use,” he said.

Chairman Hugh Nystrom said he had consulted Julie Bowling at the Farm Bureau and was told there is a difference between existing backyard chickens and those just being established. He said that deed restrictions and neighborhood covenants can prohibit them.

Commissioner Carson Dailey said he saw no problem with backyard chickens. Smith said he’s simply looking to regulate it so “you don’t bother your neighbors.”

No action was taken on the Smith discussion item.

When the chairman called on Denton to speak he said, “We hope you are in a fowl mood” and added that it was unusual to see the WBIR-TV personality and extension agent in a bow tie.

The commission also honored the Strata-G company for receiving the national U. S. Chamber of Commerce “Dream Big Small Business of the Year Award.”  Chairman Nystrom introduced state Senators Becky Massey and Richard Briggs who read a proclamation from the Tennessee Senate.

President and CEO Dan Hurst spoke briefly, recognizing his team and his wife, Patty, for their contributions. Strata-G is a company that deals with environmental, safety, health, waste management, transportation and risk management. Nystrom read the local resolution noting the company has received more than 30 awards and is involved in local causes.

The commission also gave first reading approval of regulating microbreweries in Neighborhood Commercial Districts and requiring a use-on-review before approval  with Commissioner Smith voicing some hesitation. Smith asked if bars were permitted in these CN districts and was told they are not. December 9th has been set for final discussion and a decision.

Katy Smith, a Maloney Road resident, spoke to the commission about crosswalk and traffic lights needed at schools. The commissioners discussed many schools with crossing problems and parent drop-off difficulties.

Chairman Nystrom reminded commission members that each needs to nominate a citizen to the upcoming Charter Review Committee.