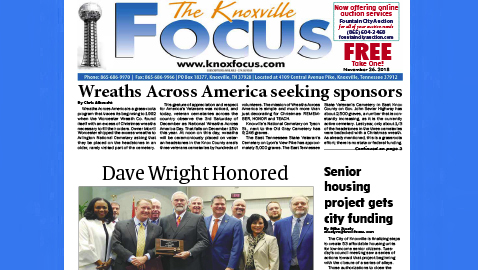 Dave Wright, elected as state House District 19’s representative, resigned from the Knox County Commission after twice serving as chairman. His ten years came to mind as he spoke to the commission last week.

”I still want to say it this way, ’My fellow commissioners,’” Representative-elect Wright said as he began to address the body.

“Tonight is really important to me. I arrived at county commission during a time of controversy and turmoil,” he said, adding, “and I am leaving Knox County Commission in a time of turmoil.”

“It’s not been just me, it’s taken all the work of those people and I thank the Knox County Commission especially for Carter Elementary and Gibbs Middle School,” he said.

Wright mentioned having lunch with the Knox County state delegation and Congressman-elect Tim Burchett. “It’s only through the collaborative effort of the commission and the mayor that the things I have spoken about have been accomplished.”

Resumes to replace Wright as District 8’s commission representative are being sought and must be submitted by noon on December 3 by mail, fax, email or hand delivery to the Knox County Commission Office, Suite 603, City-County Building, 400 Main Street, Knoxville, TN 37902. The phone number is (865) 215-2534 and the fax number is (865) 215-2038. The email address is commission@knoxcounty.org.

The commissioners voted to set Wednesday, December 5 as the date to appoint a replacement for Wright. The public meeting will start at 2 p.m. and Chairman Hugh Nystrom said there are several qualified people who have voiced an interest in filling Wright’s district seat. At 2:30 the commission will vote to choose the new District 8 commissioner.