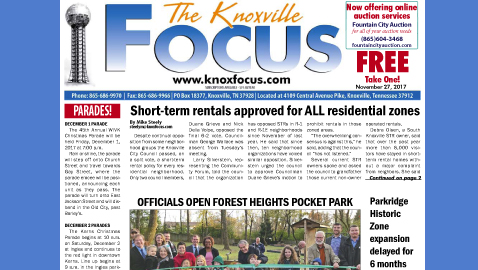 Despite continual opposition from some neighborhood groups the Knoxville City Council passed, on a split vote, a short-term rental policy for every residential neighborhood. Only two council members, Duane Grieve and Nick Della Volpe, opposed the final 6-2 vote. Councilman George Wallace was absent from Tuesday’s meeting.

Larry Silverstein, representing the Community Forum, told the council that the organization has opposed STRs in R-1 and R-1E neighborhoods since November of last year. He said that since then, ten neighborhood organizations have voiced similar opposition. Silverstein urged the council to approve Councilman Duane Grieve’s motion to prohibit rentals in those zoned areas.

“The overwhelming consensus is against this,” he said, adding that the council “has not listened.”

Debra Olsen, a South Knoxville STR owner, said that over the past year more than 8,000 visitors have stayed in short-term rental homes without a major complaint from neighbors. She said that such rentals provide a “home away from home.”

Mary English spoke for the League of Women Voters asking the council to also approve Grieve’s motion to require notification to neighbors by any STR operator.

The final vote was 6 to 2 in favor of the STR ordinance.

Grieve offered two amendments to the ordinance, the first dealing with excluding R-E and R-1A zoned areas. It failed.

Grieve then offered an amendment to require notification by STR owners to adjoining homeowners.

Councilman Nick Pavlis then offered a successful amendment to the STR ordinance giving non-owner occupied rentals a year’s grace before they would be illegal. Grieve said that idea was “inconsistent” and was “not looking at the welfare of the neighborhoods.”

Palmer replied that the one-year delay for non-owner occupied STRs will give the owners an opportunity to divest the property or move into it to qualify.

“It’s one of the most fair solutions,” Palmer said.

The grandfathering of the non-owner occupied rentals passed 6-2 with Grieve and Della Volpe voting “No.”

Pavlis then succeeded in passing the STR ordinance on an “emergency” motion, meaning it takes effect immediately, and the motion passed 7-1.