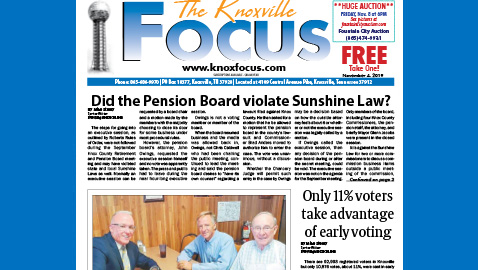 Did the Pension Board violate Sunshine Law?

The steps for going into an executive session, as outlined by Roberts Rules of Order, were not followed during the September Knox County Retirement and Pension Board meeting and may have violated state and local Sunshine Laws as well. Normally an executive session can be requested by a board chair and a motion made by the members with the majority choosing to close its door for some business under most procedural rules.

However, the pension board’s attorney, John Owings, requested the executive session himself and no vote was apparently taken. The press and public had to leave during the near hour-long executive session.

Owings is not a voting member or member of the board.

When the board resumed business and the media was allowed back in, Owings, not Chris Caldwell who had been chairing the public meeting, continued to lead the meeting and said the pension board desires to “have its own counsel” regarding a lawsuit filed against Knox County. He then asked for a motion that he be allowed to represent the pension board in the county’s lawsuit and Commissioner Brad Anders moved to authorize him to enter the case. The vote was unanimous, without a discussion.

Whether the Chancery Judge will permit such entry in the case by Owings may be a decision based on how the outside attorney feels about it or whether or not the executive session was legally called by a motion.

If Owings called the executive session, then any decision of the pension board during or after the secret meeting, could be void. The executive session was not on the agenda for the September meeting. Only members of the board, including four Knox County Commissioners, the pension staff, the attorney, and briefly Mayor Glenn Jacobs were present in the closed session.

It is against the Sunshine Law for two or more commissioners to discuss commission business items outside a public meeting of the commission, especially if that matter is on the commission’s upcoming agenda.

“All meetings must be public and no secret votes may be taken. T.C.A 5-5-104. A limited exception to the open meeting rule is provided by case law due to the Judicial doctrine of attorney-client privilege; the county legislative body may meet in closed session with the county attorney or other attorney representing the count to discuss ending litigation involving the county, but NO decisions among the members of the body as to the action to be taken or votes or decisions may be made in secret, nor other matters discussed.”

The four commissioners on the pension board, Brad Anders, Larsen Jay, Randy Smith and Hugh Nystrom, should know Robert’s Rules of Order and the Sunshine Law. Three of them have served as Commission Chairman.

During the pension board’s meeting last week the minutes of the September 23 meeting were unanimously approved without reading. Copies of the minutes were not passed out or available online and appeared only in the meeting booklet distributed to the members.

The Knoxville Focus questioned the attorney’s power to call an executive session following the pension board’s meeting last Monday. Chairman Chris Caldwell was asked if a motion was made and approved to go into to the secret session. He asked Commissioner Larsen Jay if he had made such a motion and Jay said he didn’t recall.

Jay pulled the minutes from his booklet and handed them to The Focus.

The minutes reveal that Owings asked that the “Report of Legal Counsel” be delayed until the end of the September 23 meeting.

“Mr. Owings asked for an executive session with the board to advise on a litigation matter,” the minutes read, with no mention of a motion or vote to do so.

“I know there wasn’t a motion but I’ll have to check with the attorney to see if that’s a requirement,” Pension board director Jennifer Schroeder told The Focus, adding, “I’ll get back to you.”

Tuesday morning Schroeder replied, “In response to your inquiry, please be advised that the Knox County Retirement and Pension Board does not subscribe to Robert’s Rules of Order.”

Chris Caldwell, who chairs the pension board for Mayor Jacobs, promised The Knoxville Focus he would look into the issue to see if there was a motion for the executive session. He was requested twice since the October 28 meeting to respond and had not replied at press time.