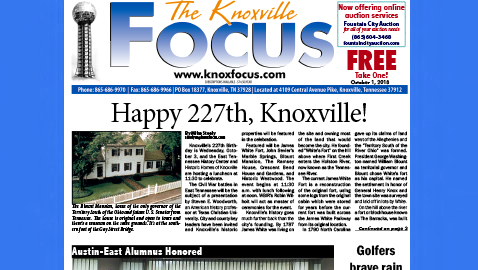 Knoxville’s 227th Birthday is Wednesday, October 3, and the East Tennessee History Center and Historic Homes of Knoxville are hosting a luncheon at 11:30 to celebrate.

The Civil War battles in East Tennessee will be the subject of a presentation by Steven E. Woodworth, an American history professor at Texas Christian University. City and county key leaders have been invited and Knoxville’s historic properties will be featured in the celebration.

Featured will be James White Fort, John Sevier’s Marble Springs, Blount Mansion, The Ramsey House, Crescent Bend House and Gardens, and Historic Westwood. The event begins at 11:30 a.m. with lunch following at noon. WBIR’s Robin Wilhoit will act as master of ceremonies for the event.

Knoxville’s history goes much further back than the city’s founding. By 1787 James White was living on the site and owning most of the land that would become the city. He founded “White’s Fort” on the hill above where First Creek enters the Holston River, now known as the Tennessee River.

In 1790 North Carolina gave up its claims of land west of the Alleghenies and the “Territory South of the River Ohio” was formed. President George Washington named William Blount as territorial governor and Blount chose White’s fort as his capital. He named the settlement in honor of General Henry Knox and the town site was surveyed and laid off in lots by White.

On the hill above the river a fort or blockhouse known as The Barracks, was built and housed soldiers to protect settlers and travelers and to oversee relations with the neighboring Cherokee nation.

Blount’s wife, the former Mary Grainger, came from North Carolina and presided over the governor’s duties. Blount built a log home, now covered with wooden siding, and added a flower garden in front of the house. Blount Mansion stands yet today along with a separate visitor’s center.

In 1791 Blount hosted more than 1,500 Native Americans in Knoxville along with some 40 chiefs. He placed a large tent atop the knoll and Blount appeared in full military costume. The peace treaty signed that day didn’t last long.

The territorial legislature passed  an act in 1794 recalling the founding Knoxville three years earlier and Knoxville served as the territorial and then state capital until 1811 when it was relocated in Nashville.

Earlier. in 1794, the territorial legislature met and established Blount College, which grew into the University of Tennessee. Rev. Samuel Carrick, a Presbyterian minister, became college president.

In 1796 a Knoxville meeting developed the Constitution of Tennessee and elected John Sevier as the first governor. He began to build a large brick home in the city which was later completed by another owner. Sevier served for eleven years and was then elected to U. S. Congress. He died while a survey journey to the Creek nation and, years later, his body was exhumed and reburied in the lawn of the Knox County Courthouse along with the graves of his two wives.

In 1815 Thomas Emmerson was chosen as Knoxville’s first mayor. He later served as Judge of the Tennessee Supreme Court.