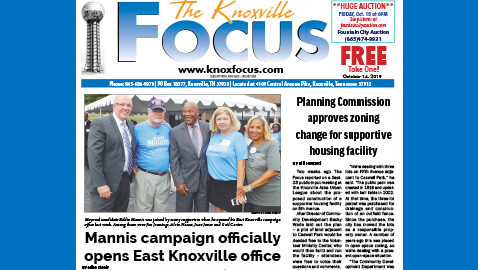 Knoxville businessman and candidate for mayor Eddie Mannis stepped into Democratic East Knoxville last week to officially open his campaign office at 900 East Hill Avenue where he was welcomed by many of his supporters.

Mannis was introduced by former Commissioner Sam McKenzie who said that Thomas “Tank” Strickland, who is hospitalized, sent his well wishes and endorsement of Mannis.

Mannis said he is committed to the future of East Knoxville and Downtown Knoxville. The HonorAIr founder has a history of progressive positions and support of community projects. He said he has served on the Zoo Knoxville board for eight years and added, “There is so much potential in East Knoxville, so much opportunity in Chilhowee Park and East Towne Mall.”

“I want to be intentional with our focus on East Knoxville and complete the Magnolia Corridor all the way through,” he said.

“But I can’t do it all alone. It takes smart decisions and I’ll listen to what you say and take it into consideration,” Mannis said, adding, “When we decide we’ll do it collectively.”

“Let’s move Knoxville forward, I promise I will do that,” he said.

Following the opening of the campaign office the well-wishers dined on a full meal from Jackie’s Dream restaurant. Mannis then headed out for a meeting of the Parkridge Community Organization for a discussion with residents there.