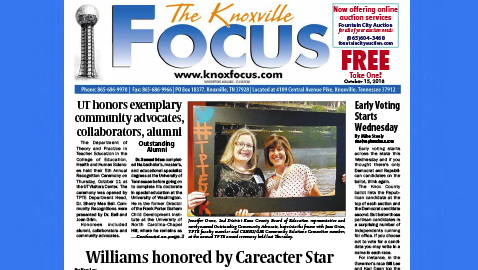 The Department of Theory and Practice in Teacher Education in the College of Education, Health and Human Sciences held their 5th Annual Recognition Ceremony on Thursday, October 11 at the UT Visitors Center.  The ceremony was opened by TPTE Department Head, Dr. Sherry Mee Bell. Community Recognitions were presented by Dr. Bell and Joan Grim.

Dr. Samuel Odom completed his bachelor’s, master’s, and educational specialist degrees at the University of Tennessee before going on to complete his doctorate in special education at the University of Washington. He is the former Director of the Frank Porter Graham Child Development Institute at the University of North Carolina-Chapel Hill, where he remains as a Senior Research Scientist and the co-director of the National Clearinghouse on Autism Evidence and Practice.  Dr. Odom is the author or co-author of over 175 journal articles and book chapters, and has edited 10 books on early childhood intervention and developmental disabilities.  His current research focuses on treatment efficacy for elementary and high school youth with autism spectrum disorder.

Dr. Odom’s significant contributions to the field have been recognized both nationally and internationally. He is the recipient of the Arnold Lucius Gesell Prize from the Theordor Hellbrugge Foundation in Munich, Germany, for his career achievement in research on social inclusion and child development. He is also the recipient of an honorary doctoral degree from Stockholm University.  He is currently a visiting professor at Stockholm University and San Diego State University.

Michael Robinson graduated with a bachelor’s degree in geography and a master’s degree in Curriculum and Instruction of the Social Studies from the University of Tennessee.

Mr. Robinson has received numerous accolades for his teaching, including the 2016 Humanities Tennessee Outstanding Educator Award and the 2014 National Council for Geographic Education Distinguished Teaching Award.  He has also received travel awards to study aspects of historical interest in Germany, China and Korea.

Cathy Stubbs graduated from the University of Tennessee with a bachelor’s degree in special education, and continued to complete her Master of Education and Educational Specialist degrees.

Ms. Stubbs serves on the Dean’s Board of Advisors for the University of Tennessee’s College of Education, Health, and Human Sciences. Additionally, she is the treasurer of the Friends of Newton Parks board, and volunteers at Middle Ridge Elementary School in Covington, Georgia.

Mike Brewer is a graduate of Tennessee Tech University and is in his 24th year of employment in Blount County Schools.  His career in education in Blount County includes serving as a math teacher at Carpenters Middle School, an assistant principal at Friendsville Elementary School, an assistant principal at William Blount High school, and now the special education coordinator for the district.  In his current position, Mr. Brewer oversees the transition from school to work program and student interns.

In his work in Blount County Schools, Mr. Brewer serves as chair of the Foster Care Review Board. He is a Sunday School teacher at Dotson Memorial Baptist Church and enjoys golfing in his free time.  He and his wife, Tracy, have a son, Hunter, who is a senior at Lee University in Cleveland, Tennessee.

Heather Casteel is a three-time graduate of the University of Tennessee, having most recently completed her doctorate in educational leadership and policy studies in 2018.  She currently serves as the visual arts content area specialist for Knox County Schools and is an adjunct instructor in Theory and Practice in Teacher Education.  Prior to becoming a content area specialist, she was an art teacher at Christenberry Elementary School in Knox County.

Jennifer Sobota earned a Bachelor of Science degree in Spanish and Secondary Education from Butler University in Indianapolis, and has also earned her master’s of education and educational specialist degrees from Lincoln Memorial University in Harrogate Tennessee.

Mike Edwards earned a Bachelor of Science degree in political science from the University of Tennessee. He is a former retail developer who served for 17 years as the CEO of the Public Building Authority of Knox County and the City of Knoxville.  Since 2002, he has served as the President and CEO of the Knoxville Chamber.  Under Mr. Edwards’ leadership, the Knoxville Chamber was named the 2011 Chamber of the Year by the American Chamber of Commerce Executives. The Chamber holds a Five-Star Accreditation from the U.S. Chamber of Commerce.

In 2011, Mr. Edwards was appointed to the Tennessee State Board of Education as the representative for the Second District. He was reappointed by Governor Bill Haslam for another five-year term in 2016.  In addition to these positions, he serves on the board of the U.S. Chamber of Commerce Foundation, the board of the UT-Battelle Development Corporation, the UT Graduate School of Medicine Board of Visitors, and the Great Schools Partnership Board of Trustees. He is a Ford Fellow focusing on regional sustainability and regional education partnerships.

Jennifer Owen graduated from Morristown-Hamblen High School, West in Morristown TN. She completed a degree in education at University of Tennessee, Knoxville, with teaching certifications in instrumental music and English. Her teaching career began in Morgan County Schools, where she taught music at all grade levels and English in grades 9-10. She moved to Knoxville in 1996 and taught instrumental and general music in grades K-8 until 2014.

She served as secretary and newsletter editor for the Knox County Education Association and was a liason who shared legislative information between colleagues and legislators. During this time, she began realizing that advocating for students and public schools from inside her classroom was not enough.

Jennifer was elected to the Knox County Board of Education, representing the Second District, in 2016. Prior to election, she expressed three goals for the Board:

Make decisions in the best interests of the students;

Work to attract and retain great educators and give them autonomy to make instructional decisions in their classrooms; and

Repair relationships and trust with our community by being representative, accountable, and transparent.

She is a tireless advocate for public schools.

Bill Woodrick is a graduate of Mississippi Southern University, Gallaudet University and Mississippi State University.  Mr. Woodrick was a teacher and vocational counselor at the Mississippi School for the Deaf before joining the faculty of the Special Education department at the University of Tennessee in 1967.

While on the faculty, Mr. Woodrick assisted in the development of programs to prepare rehabilitation specialists, interpreters for the deaf, and services for disabled students.  He directed programs among 15 southeastern states to establish interpreter training and access to postsecondary educational programs for deaf and hard of hearing students.  He also served as consultant to rehab centers across the nation and as an expert witness.