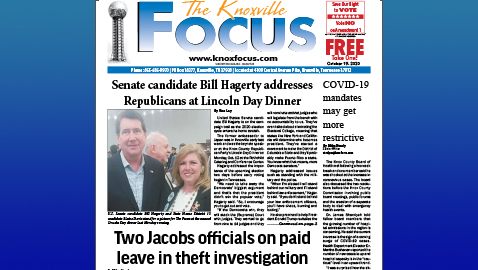 United States Senate candidate Bill Hagerty is on the campaign trail as the 2020 election cycle enters its home stretch.

The former ambassador to Japan was in Knoxville early last week and was the keynote speaker at the Knox County Republican Party’s Lincoln Day Dinner on Monday, Oct. 12 at the Rothchild Catering and Conference Center.

Hagerty addressed the importance of the upcoming election two days before early voting began in Tennessee.

“We need to take away the Democrats’ biggest argument and that’s that the president didn’t win the popular vote,” Hagerty said. “So, I encourage you to get out and vote.

“If the Democrats win, they will stack the (Supreme) Court with judges. They wanted to go from nine to 14 judges and they will nominate activist judges who will legislate from the bench with no accountability to us. They’ve even talked about eliminating the Electoral College, meaning that states like New York and California will determine who becomes president. They’ve started a movement to make the District of Columbia a State and they’ll probably make Puerto Rico a state. You know what that means, more Democrat senators.”

Hagerty addressed issues such as standing with the military and the police.

“I look forward to working with the president to grow the economy,” Hagerty said. “The big issue that everyone is asking about is the economy and you need a leader who is a business man, a leader that’s signed the front of a paycheck and not just the back of one.

“I helped revitalize the economy in Tennessee during the last recession. Our plan worked in Tennessee and it can work in Washington and that’s why President Trump appointed me to the White House Economic Recovery Task Force.

“As ambassador to Japan, you had North Korea, Russia and China all right there and China is a big threat to us,” he said.

Hagerty also noted that the country must get the COVID-19 pandemic under control.

“We must control this pandemic and, make no mistake about, China is to blame for this,” he said. “But we can have this under control by the end of this year or the beginning of next year.

“We have five vaccines in the trial stages and all we need is FDA approval.”

Hagerty will continue to travel throughout the state until Election Day and said he looks forward to serving the people of Tennessee.