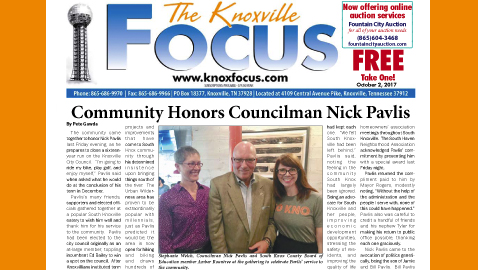 The community came together to honor Nick Pavlis last Friday evening, as he prepares to close a sixteen-year run on the Knoxville City Council.  “I’m going to ride my bike, play golf, and enjoy myself,” Pavlis said when asked what he would do at the conclusion of his term in December.

Pavlis’s many friends, supporters and elected officials gathered together at a popular South Knoxville eatery to wish him well and thank him for his service to the community.  Pavlis had been elected to the city council originally as an at-large member, toppling incumbent Ed Bailey to win a spot on the council.  After Knoxvillians instituted term limits Pavlis made history by being the only former councilman to win an election from a seat from another district.  To date, Nick Pavlis remains the only former city councilman able to make a political comeback.  It was all the more impressive as Pavlis won the right to represent the South Knoxville district when he was not a native of the area.  Pavlis ran promising to be an aggressive advocate for South Knoxville and proudly cites the downtown renovations, as well as the numerous projects and improvements that have come to South Knox community through his determined insistence upon bringing things south of the river.  The Urban Wilderness area has proven to be extraordinarily popular with millennials, just as Pavlis predicted it would be; the area is now open for hiking and biking and draws hundreds of people weekly.  Real estate values have risen in South Knoxville and houses are selling quickly, a big turnaround from the time before Nick Pavlis returned to the city council.  Pavlis had again predicted just such an impact once the Urban Wilderness area was completed.  Many long-time residents of South Knoxville have been astonished by how quickly homes in the area are selling.

Pavlis was emotional when he stood up in a room packed with friends and supporters.  “This is hard,” he confessed after being introduced by Mayor Rogero.  “I don’t really know what to say.”  Pavlis collected himself and told the audience he had made a series of five promises when he attempted to regain a seat on the Knoxville City Council.  Pavlis recounted the promises he made to the people of South Knoxville and proudly announced he had kept each one.  “We felt South Knoxville had been left behind,” Pavlis said, noting the feeling in the community South Knox had largely been ignored.  Being an advocate for South Knoxville and her people, improving economic development opportunities, stressing the safety of residents, and improving the quality of life were among the promises he made when seeking to return to the City Council.  The last was being accessible to the people who elected him.  For the past eight years, Nick Pavlis has held quarterly “Coffee With the Councilman” meetings where anyone could approach him for help, discuss issues, or even relate a gripe.  Those meetings were in addition to the high profile Pavlis kept in regularly attending community, neighborhood and homeowners’ association meetings throughout South Knoxville.  The South Haven Neighborhood Association acknowledged Pavlis’ commitment by presenting him with a special award last Friday night.

Pavlis returned the compliment paid to him by Mayor Rogero, modestly noting, “Without the help of the administration and the people I serve with, none of this could have happened.”  Pavlis also was careful to credit a handful of friends and his nephew Tyler for making his return to public office possible, thanking each one graciously.

Nick Pavlis came to the avocation of politics genetically, being the son of Jamie and Bill Pavlis.  Bill Pavlis served on the Knox County Commission, including a stint as chairman, as well as the Knoxville City Council.  Yet when Nick wanted to run for an at-large seat, father Bill advised against it.  Laughing, Nick Pavlis remembered virtually nobody thought he could win a spot in the run off, much less defeat one of the powerful incumbents in an at-large race.  Pavlis remembered a scant number of friends believed he could win and the young candidate bore down on a few issues, not the least of which was public dissatisfaction with the way the council ran the City Beer Board.  Once elected, council members put Pavlis in charge of the Beer Board, not a few of whom hoped the new councilman would fail.  Instead, Pavlis made needed changes, held businesses accountable and generally made a success of an oftentimes difficult and controversial position.  Pavlis also displayed a wide streak of independence, frequently bucking then-Mayor Victor Ashe, along with Carlene Malone.  Malone was on hand last Friday night to honor her friend and former colleague.

The Ashe administration tried to make things as difficult as possible for Pavlis, but the councilman never wavered, nor did he buckle under.  During Pavlis’s second stint on the city council he faced the difficulty of helping a community whose geographical boundaries are bordered by a river on every side.  When the city closed the Gay Street bridge for repairs, over a period of three years, it made coming to South Knoxville very difficult for everybody.  Pavlis fought against the notion South Knoxville was merely a through way for residents of Sevier County and tourists, as well as doing as much as he could for those businesses who suffered as a result of the bridge closure.

As people began to assemble to honor Nick Pavlis for his service, one saw Republicans and Democrats, as well as Independents and some who had no political affiliation at all.  There were more community activists and neighborhood representatives present than politicians, a rare thing these days.  There was a contingent of former elected officials, although South Knox Board of Education member Amber Rountree was on hand, delightedly sharing pictures of her two boys with her friends.  Carson Dailey, South Knox County’s Commissioner, along with his wife, Tammy, came by to shake hands with Pavlis and the two had worked well together on behalf of the community they both represented.  Stephanie Welch, candidate for the City Council from South Knoxville and endorsed by Pavlis, moved through the packed room, less campaigning than listening and meeting folks.

Conspicuously absent from the very well attended gathering to honor Nick Pavlis were the big-money donors and Knoxville’s elite.  Those folks are already looking to the future, but it was clear Nick Pavlis never gave them a single thought.  Pavlis understood the most heartfelt tribute any public official can receive is from the people he truly represented.