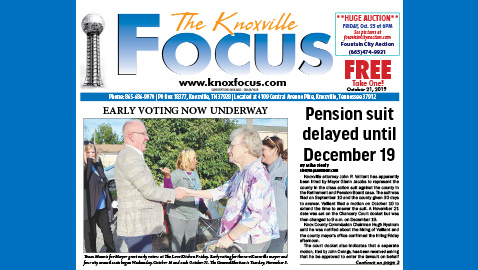 Knoxville attorney John P. Valliant has apparently been hired by Mayor Glenn Jacobs to represent the county in the class action suit against the county in the Retirement and Pension Board case. The suit was filed on September 10 and the county given 30 days to answer. Valliant filed a motion on October 10 to extend the time to answer the suit. A November 21 date was set on the Chancery Court docket but was then changed to 9 a.m. on December 19.

Knox County Commission Chairman Hugh Nystrom said he was notified about the hiring of Valliant and the county mayor’s office confirmed the hiring Friday afternoon.

The court docket also indicates that a separate motion, filed by John Owings, has been received asking that he be approved to enter the lawsuit on behalf of the Knox County Retirement and Pension Board. That decision to authorize him to represent them came after a closed-door executive meeting of the Pension Board that Owings, the board attorney, offered and received permission, after the private session.

The pension board, however, is not a party in the suit.

The class action suit, Christ Etters et al. vs. Knox County, is asking if the commission and mayor have the powers to grant additional retirement pay beyond what the Knox County Charter permits.  Commissioner Richie Beeler has a discussion item on Monday’s commission agenda to direct the outside hired attorney to seek the “sole legal issue” and not spend taxpayer money in an attempt to dismiss the case prior to a court ruling.