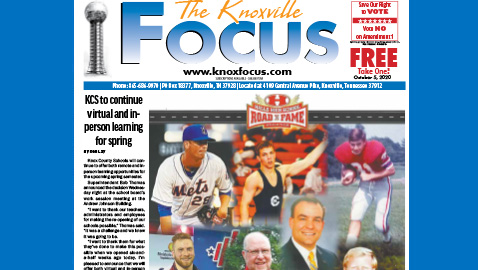 Halls High Road to Fame’s Class of 2020 has quality

The second class of the Halls High Athletics’ Road to Fame may not have the quantity of the inaugural 2019 class, but it has the quality.

The seven inductees of the 2020 class will be announced and presented in a ceremony prior to Halls’ homecoming game against South-Doyle Friday night.

Talk about quality. The school’s football field just happens to be named after one of this year’s Road to Fame honorees – Dink Adams, or as it says on the scoreboard, Dinzle “Dink” Adams.

During his 32-year career at Halls, from 1968 until 2000, Adams was a physical education teacher and head football coach, assistant principal and athletic director, and head principal.

“I think they are as exceptional as the 12 inductees we had in the first class,” said Jerry Julian, president of the Road to Fame program. “Each one is an individual with great achievements.

“There are two that stick out especially,” added Julian. “One of the youngest in the group is Wesley Kitts, who is on the Olympic weightlifting team and will be going to Japan in 2021. He will be the first Halls graduate that we’re familiar with to ever participate in the Olympics.

“The second is the elder of the group and that’s Dinzel “Dink” Adams. He’s going in as a coach and administrator. The field has been named after him and he was quite a figure in the Halls community and the educational system and the athletic system for a good number of years.”

Work on the 2020 Road to Fame class started in January when nomination forms were distributed.

“The only real effects the pandemic has had on us was it reduced the number of our membership meetings somewhat and we’ve been scheduled to have the Road to Fame game on three different occasions until now,” said Julian.

The Road to Fame has eight people on its Board of Directors and they also make up the selection committee.

The number of inductees will be reduced to four per year, starting in 2021.

“Hopefully, as time goes on, the Road to Fame will get wider and brighter,” said Julian.

BRYCE BEELER: Was a record-setting hitter as a baseball player (2008-11) for the Red Devils … As a senior, he batted .570 and finished with 41 career doubles (school records) and also belted 16 home runs …Earned All-State honors and was All-PrepXtra third baseman and District 3-AAA MVP in regular season … He attended University of Memphis (2012-14) and was drafted by the New York Mets as a right-handed pitcher by his junior year … Played for four different minor league pro ball clubs.

RANDY CARROLL: Excelled as a three-sport athlete in football, basketball and baseball (1970-73) and was named Most Athletic as a senior … All-KFL and All-East Tennessee in football … Three-year starter at linebacker in high school and at Wake Forest University, where he signed a Division 1 full scholarship … Coached football at Gibbs for 30 years, including 27 seasons as head coach … Guided Gibbs to 10 playoff appearances and four district titles … Since retiring from Knox County Schools, he has been an assistant coach at Webb for 11 years and involved in five state championships.

SCOTT CARTER: A standout in football and baseball (1995-97) … A three-year starter as a tailback, linebacker and punt returner … Twice made Sportswriters’ and Associated Press’ All-State teams as a running back … a Mr. Football Class 4A Back of Year runner-up … Rushed for school record 3,371 career yards … Named to Tennessee Baseball Coaches’ Super Sophomore team and was a two-time All-District 3-AAA honoree … Continued football career as a running back at East Tennessee State University and was team captain in 2002 … Has been Director of Athletics at ETSU since 2017.

CODY HUMPHREY: Participated in wrestling (1999-2002) and was the 2002 state champion in the 130-pound weight class … Had 159 high school career wins and was a four-time KIL champion … Received a scholarship to Carson-Newman College and was a 2006 NCAA All-American and Academic All-American in 2006 and 2007 … Since 2009, he has been coaching and building the Halls Middle School wrestling program and strengthening future HHS wrestlers.

WESLEY KITTS: Excelled as a running back for Red Devils (2005-08) … In his senior year, he carried the ball 204 times for 1,606 yards and 17 touchdowns … Began his college career as a tailback at Austin Peay State University … Following graduation, he continued his athletic career in Olympic Weightlifting and CrossFit … Currently a member of the USA weightlifting team and dedicated to making the 2020 Tokyo Olympics, which were rescheduled for the summer of 2021 because of coronavirus concerns.

LARRY NEELY: Competed in football, baseball and wrestling in the mid-1970s … Set a school record for most fumbles recovered in a single game … Was a three-time district champion and two-time region champion in wrestling and placed fourth in state in 1977, helping the Halls team finish third … In his senior year, he also competed in Freestyle State Wrestling Championships and won the 177-pound weight class to earn an opportunity to compete at the national level … Has been a longtime coach and his involvement with FCA in high school continues now as he leads young people and supports their commitment to Christ and athletics.