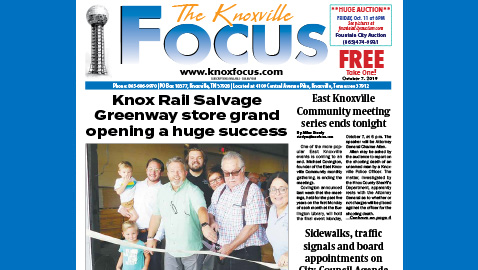 Joel Piper, vice president of marketing and operations of Knox Rail Salvage welcomed several hundred people to the opening ceremonies of Knox Rail Salvage’s 4214 Greenway Drive location. Located near Fountain City and the Washington Pike exit off I-640 the large facility offers cabinets, floors, doors and other products at the lowest prices possible.

In addressing those who attended, Piper recognized owner Mike Frazier and credited him with the success of the company. Piper stressed that Knox Rail Salvage now has two stores, one downtown at 200 East Magnolia and the new location on Greenway.

“We’re focused on satisfying the customer and we want to thank God’s glory for all of our success,” Piper told the crowd, adding “You all being here is a great encouragement to us.”

Piper told a story of the old Southern Railroad Salvage, the forerunner of Knox Rail Salvage. He said the store had a $39 fishing reel that he wanted as a child and his father told him to go buy it.

“Dad and I still have that reel. At the time I was so intrigued by the business. It was the first time I had saved money and bought something. Now I’ve worked there twenty years, it’s amazing how God kind of works thing around that way,” Piper said.

Piper introduced the staff of the new location including April Smith, the manager, and he reminded people that Knox Rail Salvage continues to operate its store on Magnolia Avenue.

“We’re not going anywhere,” he said of that location.

“For those of us who like to fix up houses this is like Disney World,” Mayor Jacobs told the event.

“Every time my wife and I have done business with Knoxville Salvage they’ve been wonderful and knowledgeable,” Jacobs said.

“Congratulations on 40 years and here’s to another wonderful 40 years,” Jacobs said.

Founded in 1980 by Mike Frazier and Walter Carter the company has been known for delivering great value and low prices. Today Knoxville Salvage specializes primarily in home improvement products and selling those products at discount prices. Piper emphasizes that not only does Knox Rail Salvage feature low prices but also has one-on-one personal service that encourages word of mouth advertising from its customers.

Those people attending were given tickets for an every-fifteen minute drawing and, as part of the grand opening, Knoxville Salvage gave away three kitchens, valued at $3,000 each. The winners were selected every two hours starting at 2 p.m. and they were Belinda Moisan, Lora Galloway and Kathy Nipper.

Knox Rail Salvage also held twenty-five ticket drawings about every 15 minutes for other items and offered everyone 15% on anything purchase during the event.

By the end of the day Knox Rail Salvage served 672 free hot dogs to the crowd and it was said to be a great day and event.