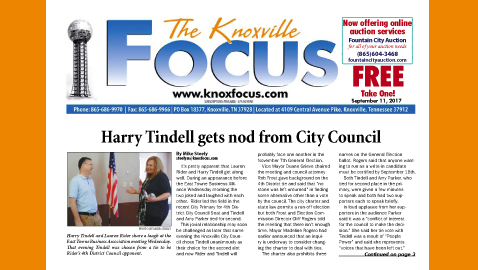 It’s pretty apparent that Lauren Rider and Harry Tindell get along well. During an appearance before the East Towne Business Alliance Wednesday morning the two joked and laughed with each other.  Rider led the field in the recent City Primary for 4th District City Council Seat and Tindell and Amy Parker tied for second.

This jovial relationship may soon be challenged as later that same evening the Knoxville City Council chose Tindell unanimously as their choice for the second slot and now Rider and Tindell will probably face one another in the November 7th General Election.

Vice Mayor Duane Grieve chaired the meeting and council attorney Rob Frost gave background on the 4th District tie and said that “no stone was left unturned” in finding some alternative other than a vote by the council. The city charter and state law permits a run-off election but both Frost and Election Commission Director Cliff Rogers told the meeting that there isn’t enough time. Mayor Madeline Rogero had earlier announced that an inquiry is underway to consider changing the charter to deal with ties.

The charter also prohibits three names on the General Election ballot. Rogers said that anyone wanting to run as a write-in candidate must be certified by September 18th.

Both Tindell and Amy Parker. who tied for second place in the primary, were given a few minutes to speak and both had two supporters each to speak briefly.

In loud applause from her supporters in the audience Parker said it was a “conflict of interest for the council to make the decision.” She said her tie vote with Tindell was a result of “People Power” and said she represents “voices that have been left out.”

Tindell told the council that he supports efforts to grow the economy and believes  in “working together and inclusiveness.”

Commissioner Daniel Brown asked about a “coin toss” and if other cities have used it to decide a tie. Frost said that the council would have to agree to abide by the results of a toss.

Frost also said that a “coin toss” was possible but setting it up, who would toss it, etc. was complicated. It became apparent that the council wanted a voice in the decision as to who would take the second slot.

“We were elected by people to use our best judgement, let’s just strap it on and do the job,” said Nick Della Volpe, who will be replaced on council by either Rider or Tindell.

In a roll call vote all nine current city council members gave Tindell their vote. Councilman Finbarr Saunders noted that the vote by the council is “not an endorsement” and urged supporters of both candidates to stay involved and take part in the November election.

“Let’s see if we can’t double or triple the vote,” Grieve suggested regarding the upcoming General Election.

Although Tindell got the vote of the council for the second place slot the decision hinges on the official certification of the election later this month. Should the vote count be different the selection on Tindell could be void.

In an impromptu rally following the council’s decision for Tindell, Parker told a circled crowd of supporters that she intends to become a certified write-in candidate to oppose both Rider and Tindell.