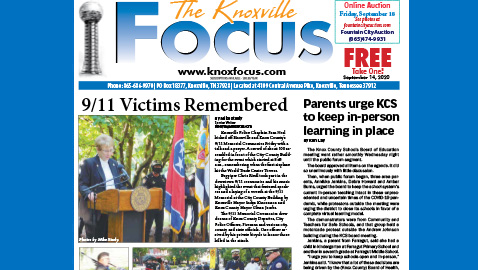 Knoxville Police Chaplain Pam Neal kicked off Knoxville and Knox County’s 9/11 Memorial Ceremonies Friday with a talk and a prayer. A crowd of about 100 assembled in front of the City-County Building for the event which started at 8:45 a.m., remembering when the first airplane hit the World Trade Center Towers.

Bagpiper Chris Riedl took part in the downtown 9/11 ceremonies and his music highlighted the event that featured speakers and a laying of a wreath at the 9/11 Memorial at the City-County Building by Knoxville Mayor Indya Kincannon and Knox County Mayor Glenn Jacobs.

The 9/11 Memorial Ceremonies drew dozens of Knox County Deputies, City Police Officers, Firemen and various city, county and state officials. One officer arrived by his private bicycle to honor those killed in the attack.