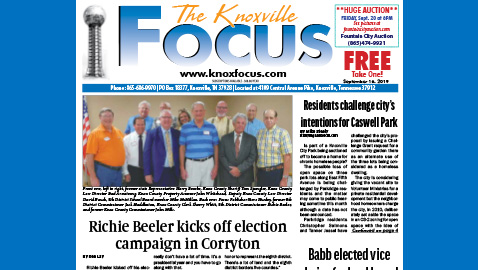 Richie Beeler kicked off his election campaign for Knox County Commission Tuesday night at the Corryton Senior and Community Center and his supporters came in droves.

Beeler, who will seek his first full term representing the Eighth District, was appointed to replace Dave Wright, who vacated the seat to serve in the state legislature.

The election is in 2020 but Beeler said that he didn’t want to waste time and he also noted that he wanted to formally announce his candidacy in Corryton.

“I wanted to let the home folks know first,” Beeler said before addressing the multitudes of supporters present Tuesday night. “The election is in March of 2020, so we really don’t have a lot of time. It’s a presidential year and you have to go along with that.

“Early voting is in February and you don’t have a lot of time to campaign during the holidays, during Thanksgiving and Christmas, so I’m ready to hit the ground running.”

He also said that he felt that announcing his candidacy in Corryton was the right thing for him to do.

“I feel like Corryton is the right place because I have deep roots in Corryton,” Beeler said. “My roots are the deepest in Corryton. I’m excited and honored to have the chance to represent the eighth district.

While this is his first election campaign, Beeler is certainly no stranger to Knox County Commission, having replaced Wright, his friend, during the midterm election.

“I’ve enjoyed serving on County Commission and it’s been a nine-month learning curve,” he said. “A lot of the journey has been about building relationships.”

“I want to keep this brief so you can enjoy your food,” said Beeler, who graduated from Gibbs High School.

In his brief remarks, Beeler discussed the past, present and future of Northeast Knox County.

“Tonight, I want to talk about three words; past, present and future,” he said. “Many of us have lived in Northeast Knox County for two or three generations and in the eighth district family roots run deep.

The crowd was comprised of Baby Boomers and those from Generation X.

Beeler’s uncle, a Korean War veteran, was also on hand.

“My Uncle Bill Beeler was a part of the Greatest Generation and a veteran of the Korean War, those people understood that you always had to make the right decisions and those weren’t always the easy ones. That generation understood that it wasn’t about ‘me,’ it was about ‘us.’”