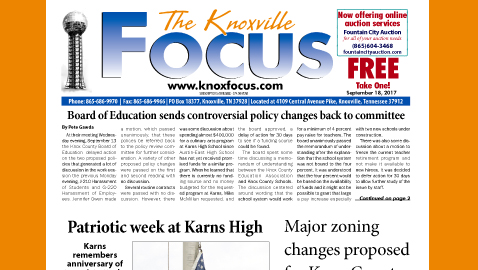 Knox County is being asked to make some major changes to its zoning regulations and the commissioners are beginning their learning curve about things like rural retreats, supportive housing and self-service storage facilities. The Metropolitan Planning Commission is proposing the changes and the Knox County Commission has scheduled a public hearing before considering the changes in a second and final reading next Monday.

Recently several commissioners had a special meeting with MPC to get more information about the changes. Commissioners Charlie Busler, John Schoonmaker, Evelyn Gill and Michelle Carringer met with MPC Director Gerald Green and his staff.

The growing number of events like festivals, gatherings, weddings and such are being eyed as needing regulations.

Green told the meeting the proposed ordinance, a change to the Knox County Code, is to “enable legal operation” on those activities that are not currently addressed in county zoning ordinances. He said the idea has been to study ordinances in other counties, preserve family farms, protect neighborhoods, insure bathroom facilities, require adequate parking, etc.

Busler, who represents north Knox County which contains several rural areas outside of Halls and Powell, questioned the ordinance’s requirements of 10, 20 and 50 acres for events. He also asked about the setback requirements from other properties.

Green replied that the regulations are for commercial events only and would not apply to things like weddings being held on farms. He said that each commercial gathering would require a use-on-review hearing prior to approval.

When asked about the growth of an event over the years Green said, “We don’t want to hinder their growth” but added that events that “get out of hand” might be required to come back for permission.

Hunter Valley Farms was mentioned as a small event venue that grew into a large attraction. The farm eventually got a “transition” zoning to permit events there two or three times each week.

“It’s a balancing act,” Green said about being fair to the rights of the property owners as well as their neighbors.

Dan Mitchell, president of the Home Builder Association of Greater Knoxville, asked if variances to 300-foot setback requirements could be sought.

“Way out in the county with nobody else around, these restrictions say they can’t do it,” Busler said.

“As long as the neighbors don’t complain, you’re not going out there?” he asked.  The answer was that the MPC staff only responds to complaints and doesn’t go around “looking for violations.”

Schoonmaker suggested that an event should get an agreement from neighbors and that a request for a rural event should go to the Board of Zoning Appeals rather than the MPC to prove a hardship.

The commission’s work session today may also discuss the approval of “supportive housing” in Office and Transitional Zones and self-service storage businesses in CN Commercial Zones.