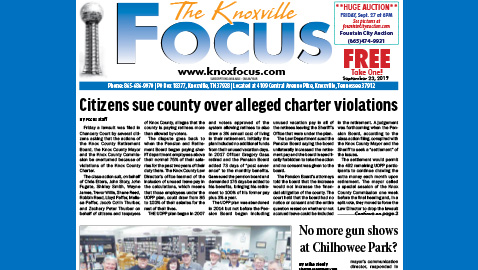 The dispute goes back to when the Pension and Retirement Board began paying sheriff department employees above their normal 75% of their salaries for the past two years of their duty there. The Knox County Law Director’s office learned of the inclusion of unused leave pay in the calculations, which means that those employees under the UOPP plan, could draw from 85 to 100% of their salaries for the rest of their lives.

THE UOPP plan began in 2007 and voters approved of the system allowing retirees to also draw a 3% annual cost of living in their retirement. Initially the plan included no additional funds from their unused vacation days. In 2017 Officer Gregory Gass retired and the Pension Board added 73 days of “post severance” to the monthly benefits. Gass sued the pension board and demanded 175 days be added to his benefits, bringing his retirement to 100% of his former pay plus 3% a year.

The UOPP plan was abandoned in 2014 but not before the Pension Board began including unused vacation pay in all of the retirees leaving the Sheriff’s Office that were under the plan.

The Law Department sued the Pension Board saying the board unilaterally increased the retirement pay and the board is specifically forbidden to take the action and no consent was given to the board.

The Pension Board’s attorneys told the board that the increase would not increase the financial obligation of the county. The court held that the board had no notice or consent and the entire question rested on whether or not accrued leave could be included in the retirement. A judgement was forthcoming when the Pension Board, according to the class action filing, conspired with the Knox County Mayor and the Sheriff to seek a “settlement” of the issues.

The settlement would permit the 492 remaining UOPP participants to continue drawing the extra money each month upon retirement. The mayor called a special session of the Knox County Commission one week before the final hearing and, in a split vote, they moved to force the Law Director to drop the lawsuit and prevent the court from ruling on the issue.

The suit charges that the Pension Board Executive Director and her staff violated Ordinance 0-06-4-101, the Charter, and the express language of the 2007 UOPP plan and were aware of the violation. The addition of vacation pay, now set at 45 days, added an additional $400,000 of taxpayer money in 2016. The suit says that the director and the board unlawfully encouraged the practice.

Although the UOPP was officially closed the suit charges it could not be amended to permit the vacation pay being added to retirement but, in June, the Pension Board successfully asked the County Commission to amend the plan. The suit says the commission cannot amend the Charter by resolution.

The suit further charges that Knox County has lost about $5.6 million as a result of including vacation pay in retirement calculations. The suit also asks the court to rule the two commission resolutions “null and void” and rule the Pension Board’s actions unlawful, make the calculations revert to what was approved by voters, and order Knox County and its executive branch to stop making payments to the UOPP retirees that include the additional leave money.