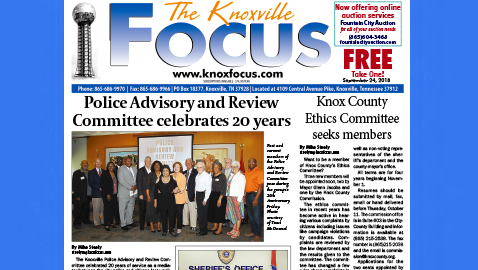 The Knoxville Police Advisory and Review Committee celebrated 20 years of service as a mediator between the city police and citizens last week. The event, held in the City-County Building Friday afternoon, recognized the citizens committee for its efforts.

One of a few such groups in the state, the city PARC committee has been recognized by Knox County Mayor Glenn Jacobs as a possible model for the county. Formed in 1998 under Mayor Victor Ashe and adopted in ordinance by the City Council in 2001 the committee usually meets each quarter in public session to hear comments from the public and meetings are moved around throughout the city to reach more of the public. PARC also takes complaints from the public directly. The phone number is (865) 215-3869.

Members of the committee review complaints and citizens can lodge complaints directly to Clarence Vaughn, the executive director.

Over the past few years PARC has reviewed complaints involving racial profiling, failure of police officers to turn on their wireless mikes while talking with suspects, and the actions of an off-duty policeman who confronted an African-American woman he assumed was stealing a car.

Mayor Madeline Rogero said that PARC is the longest running, citizen-run police advisory board in the state and said the 20 years is a “significant milestone” not only for the state but the entire nation.

“While this is a celebration it is also recognition that cities, now more than ever, need mutual understanding in order to be resilient communities,” she said.

“We are a diverse city made up of residents of different religions, cultures and languages. People’s behaviors, expectations and reactions in stressful situations are often grounded in culture and can create misunderstandings and confusion,” Mayor Rogero said. She added that PARC trains police cadets on culture differences and reaches out to ensure that residents have a chance to learn about community policing and public safety.

“When conflicts happen PARC provides an objective process that can build trust even in complicated and high-stress situations,” she said, adding, “PARC is a significant reason that Knoxville is, and will continue to be, a safe and welcoming city.”