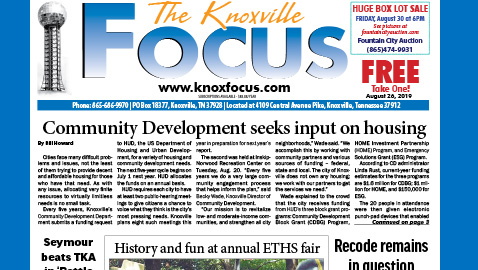 Cities face many difficult problems and issues, not the least of them trying to provide decent and affordable housing for those who have that need. As with any issue, allocating very finite resources to virtually limitless needs is no small task.

Every five years, Knoxville’s Community Development Department submits a funding request to HUD, the US Department of Housing and Urban Development, for a variety of housing and community development needs. The next five-year cycle begins on July 1 next year. HUD allocates the funds on an annual basis.

HUD requires each city to have at least two public-hearing meetings to give citizens a chance to voice what they think is the city’s most pressing needs. Knoxville plans eight such meetings this year in preparation for next year’s report.

The second was held at Inskip-Norwood Recreation Center on Tuesday, Aug. 20. “Every five years we do a very large community engagement process that helps inform the plan,” said Becky Wade, Knoxville Director of Community Development.

“Our mission is to revitalize low- and moderate-income communities, and strengthen all city neighborhoods,” Wade said. “We accomplish this by working with community partners and various sources of funding – federal, state and local. The city of Knoxville does not own any housing; we work with our partners to get the services we need.”

According to CD administrator Linda Rust, current-year funding estimates for the three programs are $1.6 million for CDBG; $1 million for HOME, and $150,000 for ESG.

The 20 people in attendance were then given electronic punch-pad devices that enabled them to indicate their top three choices about what Knoxville most needs in the areas of housing and community development. All reported they lived in the Inskip area. Of ten such survey questions, two are listed here, with results:

Other choices were Housing Quality and Upkeep, and Public Infrastructure.

Asked to name the city’s three most important Public Services needs, Employment and Job Training Services won with 21%. Second was Health Services (including mental health services) at 17%. Childcare was third at 16%.

The crowd was then divided into three groups, each of which was given markers and a large white-sheet pad. Each group discussed and recorded what they thought were the most important needs in their neighborhoods. Street safety, affordable housing, child care, and help for the working poor were among the needs listed.

“All this is part of the report we send to HUD,” said Rust.

The current information-gathering process will be completed in September this year, and analyzed the following two months. Next January a public meeting will be held to report the findings. Next spring the draft of the Five-Year Consolidated Plan will be released for public comment. By May 15, with the approval of the City Council, the report is submitted to HUD.

Included with the five-year plan will be a report that indicates what Knoxville’s top priorities are for the first year’s funds. Such a report is submitted annually. A response from HUD likely takes 60 days or so, according to Rust.

“We take all this info and whittle it down … break it down to what our goals are, what we hope to accomplish, and why we believe what our priorities are,” Rust said. “All activities are covered. We also look at data from various sources. We give a lot of opportunity for feedback.”

Anyone wishing to take the survey can go to www.knoxvilletn.gov/development.