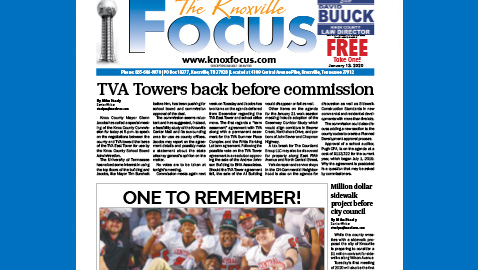 TVA Towers back before commission

Knox County Mayor Glenn Jacobs has called a special meeting of the Knox County Commission for today at 5 p.m. to speak on the negotiations between the county and TVA toward the lease of the TVA East Tower for use by the Knox County School Board Administration.

The University of Tennessee has voiced some interest in using the top floors of the building and Jacobs, like Mayor Tim Burchett before him, has been pushing for school board and commission approval of the deal.

The commission seems reluctant and has suggested, instead, a feasibility study of the Knoxville Center Mall and its surrounding area for use as county offices. Jacobs may report on the agreement details and possibly make a statement about the state attorney general’s opinion on the matter.

No votes are to be taken at tonight’s meeting.

Commission meets again next week on Tuesday and Jacobs has two items on the agenda deferred from December regarding the TVA East Tower and school office move. The first regards a “term easement” agreement with TVA along with a permanent easement for the TVA Summer Place Complex and the Fritts Parking Lot term agreement. Following the possible vote on the TVA Tower agreement is a resolution approving the sale of the Andrew Johnson Building to BNA Associates. Should the TVA Tower agreement fail, the sale of the AJ Building would disappear or fail as well.

Other items on the agenda for the January 21 work session meeting include adoption of the Greenway Corridor Study which would align corridors in Beaver Creek, Northshore Drive, and portions of John Sevier and Chapman Highway.

A tax break for The Courtland Group LLC may also be discussed for property along East Fifth Avenue and North Central Street.

Vehicle repair and service shops in the CN-Commercial Neighborhood is also on the agenda for discussion as well as Sidewalk Construction Standards in new commercial and residential developments with more than five lots.

The commission could also discuss adding a new section to the county codes to create a Planned Development approval process.

Approval of a school auditor, Pugh CPA, is on the agenda at a cost of $113,722 for the current year, which began July 1, 2019. Why the agreement is postdated is a question that may be asked by commissioners.