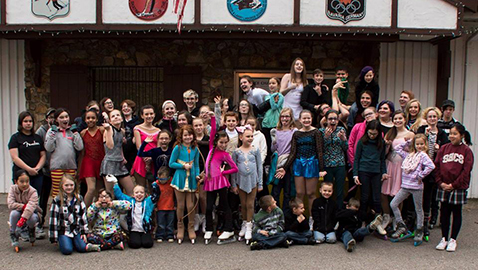 The three-day event, which is named for longtime skating instructor Robert Unger, who passed away in 2007, will feature more than 200 competitors ranging from ages 3-68.

Unger, who worked as a skating instructor at the Ice Chalet, was the first to organize regional competitions for skaters of all ability levels.

“It used to be that in order to compete in ice skating, you had to be able to compete at the highest level,” said Julia Hardin, an instructor at the Ice Chalet. “Mr. Unger, and I call him Mr. Unger because he was my first instructor, changed that.

“He set up events where skating clubs could skate and compete against each other. Before that, you could only compete at national competitions. This is very special to me because I began skating at the Ice Chalet shortly after it opened in 1963. We have competitors of all ages and abilities. We have three year olds who compete and then we have skaters as old as 68. We also have an adult synchronized skating team that will perform a program to the music of Queen.”

Admission to the completion is free.

“We want people to come out and see the skaters and the competition,” Hardin said. “Our tots are adorable in their costumes.”

Competition begins Friday, Saturday and Sunday at 7 a.m. Skaters will be in action until 9 p.m. the first two nights. The competition and festivities will continue until approximately 3 p.m. Sunday.

The organizers of the 2019 competition have planned alumni events throughout the weekend, including an alumni party Saturday, which will feature a vendor tent.

One alumnus of the Ice Chalet, Jon Robinson, coaches a figure skating team in Asia. He will bring his team to Knoxville. He’ll also compete this weekend.