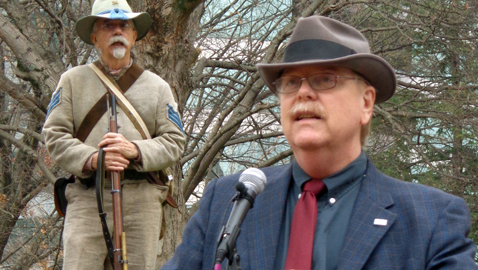 Photo by Mike Steely
Tennessee Historian Dr. Carroll Van West spoke at the dedication of “Knoxville: A Divided City” Civil War Trail Marker. He said that Knoxville is a leader in heritage work across the state.

Tennessee historian and co-chair of the Tennessee Civil War Sesquicentennial Commission, Dr. Carroll Van West, could not have said it better: “This is a great day, a kick off to several months of programs, projects, events and lectures.”

Van West made this remark during his speech at the December 5 dedication of the new plaque on the old courthouse lawn entitled “Knoxville: A Divided City.” The new marker, a part of the state-wide “Civil War Trail” is located between the historic courthouse and the City-County Building. The plaque tells of two concurrent rallies on Gay Street, one for the South and one for the North, and details an eye-witness account of the 1861 event just prior to the Civil War.

The Knox County Civil War Sesquicentennial Commission and the East Tennessee Historical Society sponsored the plaque dedication. Society Director Cherel Henderson spoke to kick off the event by speaking about the rallies.

“In the Civil War, East Tennessee has a story apart from the rest of the state,” Henderson said. “Imagine, it’s April 27, 1861. Tennessee has not yet seceded from the Union and its citizens are being courted by both sides. Imagine a large crowd standing there (on the corner of Gay Street) and there is a man addressing this crowd. It is a Unionist crowd and the man is Andrew Johnson and he’s trying to excite the crowd to the Union cause.

“Just two blocks away comes the sounds of a Confederate brass band marching down the street. Tempers flare as they near the Unionists and the Unionists think they are trying to disrupt the meeting. Fortunately cooler heads prevail someone steps in to calm the crowd.”

A young Knoxvillian, Samuel Bell Palmer, observed the event. He later joined the Confederate Army and was captured. His hand-drawn illustration of the Knoxville Rally was created while a prisoner in a Union prison camp and the drawing appears on the new historic marker.

The vote to leave the United States that year took three ballots and each time the voters in middle and west Tennessee voted to leave and the people in East Tennessee, for the most part, voted to stay loyal. President Lincoln knew of the importance of our region but it took three years to finally put the area in Union control.

“This marker is an important project and it took a lot of effort by a lot of people,” Mayor Burchett said. He joked that some of the Union and Confederate re-enactors were shaking hands earlier which reminded him of how the City and County had been at odds before but were friendly now. He said he has found Civil War artifacts with his metal detector, including a spur from a Confederate officer’s boot.

“This stuff happened just right here. A lot of folks don’t appreciate the history that we have here,” he said, calling the Civil War trail marker a “wonderful addition” to local history.

City Mayor Madeline Rogero said the marker is “significant in itself and part of a larger program telling the story all across our state.” She commented that it promotes local tourism but is “just as important for those of us who live and work here every day.”

Rogero said it was wonderful to stand on the spot and realize how part of the Civil War played out within a few blocks and “how far we have come as a community” since the divisions before and during the war, adding that “we all feel like we’re all part of the same city, came county, same state and same country.” She said the marker is a reminder of “how much an achievement that really is.”

Dr. Van West, who heads the Center for Historic Preservation at Middle Tennessee State University and chairs the Sesquicentennial Commission with Susan Whitaker, commissioner of the Department of Tourist Development, said he was not surprised to see Knoxville turn out for a mid-day event given the overcast and chilly weather.

“Your commitment to history and heritage has always been so inspiring to me,” he said, adding, “You don’t know how different that is across the state.”

He said the Civil War gave the nation a chance “to restart, to reset the button” and that effort started in places like Knoxville. “We were truly a divided state and Knoxville knew this better than anyone.”

Dr. Van West said that the passage of the 1964 Voting Rights act was “sort of the last chapter in the Civil War.”

“A grassroots effort began that would dove-tail with efforts of the state,” he said of the local effort, adding “We will host the Blue and Gray Reunion and Freedom Jubilee and Knoxville will host four days of programming from April 30 through May 3 in 2015.”

He said the Knoxville events will not necessarily focus on battle and tactics, but how people were affected by that turning point in history. He said the event will include tours of cemeteries, African Americans in the struggle, museums, symposiums, exhibitions, historic sites and a variety of programs.

Whitaker, a late arrival from a visit with Dolly Parton in Sevier County, spoke briefly and revealed that, thanks to research by Cherel Henderson, she found she is a direct descendant of Tennessee’s first Governor John Sevier. Sevier and his wives are buried just yards away in the front lawn of the old courthouse.

“My father was extremely proud of our Tennessee heritage,” she said, explaining that her sister’s middle name is “Sevier.”

“What makes Tennessee such a wonderful place to visit,” the Tourism Director said, “is that people here understand and appreciate their heritage. The people here are so far ahead of the rest of the world in understanding how history shapes who they are right now.”

“People come to Tennessee and feel like family,” she said.