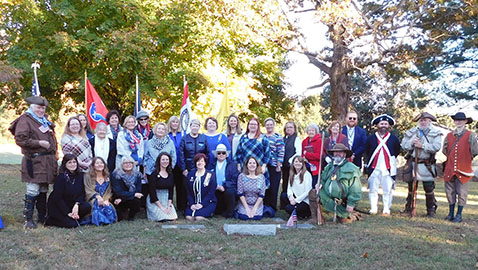 A large crowd gathered recently at a cemetery atop a hill just off North Gallaher View and Broome Roads to honor an early settler, Moses Cavett, with a grave marking ceremony. The event also saw the honoring of retired archeologist and historian Dr. Charles Faulkner.

Among the many events in history Dr. Faulkner has researched and written on was the Cavett Station massacre. Accompanied by his wife, Terry, Faulkner told of the research for his “Massacre at Cavett’s Station: Frontier Tennessee During the Cherokee Wars” book including the search for the exact location of the frontier station that was attacked by the Chickamauga Cherokee and destroyed.

“We might think that looking back at the shocking event here 325 years ago when 13 brave pioneers met their gruesome death would still be recorded in our history books. Unfortunately the details of this appalling story, the frontier massacre of Alexander Cavett, his family and several visitors, has been shadowed in time,” Dr. Faulkner said.

Faulkner talked about vague mentions in early local history including a mention that all that was left of the Cavett cabin after the attack was the chimney, adding, “The exact location has been debated since that time.”

He said that in 1981 the area was threatened with development and he was given permission to do an archeological survey of the area. He said that since then the Mars Hill Cemetery had been neglected until Cindy Johnson and Mark Jendrek spearheaded a cleanup and restoration effort.

Faulkner said that graves of the massacre victims are believed to be among over one hundred unmarked burial sites at Mars Hill although the exact location of the pioneer cabin have not been identified. The cemetery does contain the graves of Captain Moses Cavett and his wife, Agnes.

Moses Cavett was a Revolutionary War soldier and a veteran of the Battle of Kings Mountain victory by the Overmountain Men militia from our region. He was also the forefather of many East Tennessee residents, several of whom still live in the region.

City Councilman Andrew Roberto, who represents that portion of Knoxville, made a special presentation from Mayor Madeline Rogero.

Holly Matthews, regent of the Cavett Station Chapter of the Daughters of the American Revolution, spoke and presented the National DAR Preservation Medal to Dr. Faulkner.

The Mars Hill Cemetery, once the burial yard of a local church, predates the church and is presumed to be the burial ground of the Cavett family, massacred at their frontier home in 1793 by Chief Doublehead’s warriors. The Chickamauga Cherokee were on their way to attack a militia garrison fort where the old Knoxville Courthouse now stands. The warriors turned around when they heard the garrison’s cannons fire and went to Cavett’s fortified cabin.

Alexander Cavett, Moses Cavett’s brother, was there with his family and a few militiamen. The large contingent of warriors, some say 1,000 strong, laid siege and then demanded surrender. The settlers were told if they surrendered they would be spared but, when they did, Doublehead attacked and killed them although some sub-chiefs, like John Watts and Bob Benge, objected to the horrible murders.

Cindy Johnson of the Cavett Station Association and the West Hills Community Association spoke about efforts to preserve the historic site. An earlier monument, created in 1921 by the Sons of the Revolution, sits in the cemetery and tells of the massacre. Back then a descendant of Chief Bob Benge, who tried to prevent the massacre, attended the dedication ceremonies.

The ceremonies included a three musket firing salute and presentation of flags. Following the ceremonies Dr. Faulkner signed copies of his book on the massacre and chatted with attendees.