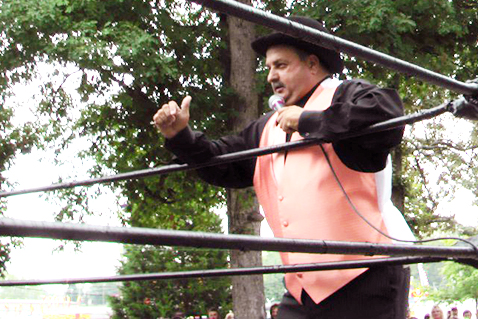 The local wrestling community lost one of its legendary figures on Saturday as Terry Bundren, aka Terry Landell passed away Saturday, Feb. 26.

Bundren was a longtime fixture in East Tennessee’s wrestling community and a founder of Tennessee Mountain Wrestling. He also had a community access television wrestling show for years and had a long association with K-Town Bonding Company.

The Terry Landell character was often a bad guy in wrestling, but his stage persona couldn’t have been more different.

“That was his persona. That was the Terry Landell character. He was one of a kind. He was just a great person and I’m going to miss him.”

In addition to his work with Tennessee Mountain Wrestling, Bundren did free shows, and contributed to the Shriners and his other charity work included Christmas for the Kids.

He was also a fixture at area parades and had a portable wrestling ring constructed.

“My son was interested in wrestling and I handled the media and started a Tennessee Mountain Wrestling fan club on Facebook.

Family obligations would cause Garrett to leave Bundren’s organization. Garrett, however remained friends with him and had great respect for Bundren’s charity work.

“My son started playing baseball and so I started spending time at ball fields and was coaching three different teams,” Garrett said. “Wrestling season has no offseason. It’s 24-7-365.”

Garrett said that Bundren had an impact on everyone in Knoxville.

“Terry’s show on CTV was must-see television and I think most people who knew about him knew about him because of his TV show,” Garrett said. “If you passed his show, you had to stop.

“I think he had an impact on everybody who lives in Knoxville.”

A polarizing personality on the wrestling scene, Bundren had a heart for kids, according to Garrett.

“Terry wanted everybody to be entertained,” Garrett said. “He did free shows and he did benefit shows. He did a lot for a lot of people. He worked with the police to help underprivileged kids get clothes and school stuff.”

A regular at the Shriners Circus, Bundren once constructed a ring that was accessible for children with special needs.