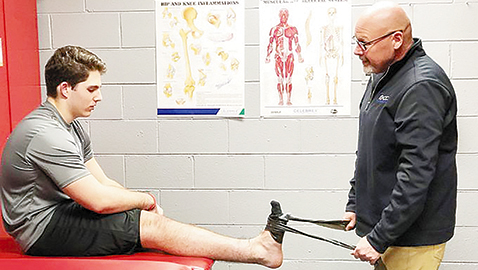 Injuries occur in athletics. They are part of the game.

But student-athletes at 15 high schools in the local area are attended to and treated quickly by certified athletic trainers from the Knoxville Orthopaedic Clinic when these unfortunate situations happen in practice and games.

KOC doctors also are on the sidelines at local football games.

These services not only act like a safety net, but also provide a peace of mind for the participants and everyone concerned, particularly the parents.

For providing these invaluable services for years, the KOC was recognized by the Tennessee Interscholastic Athletic Administrators Association April 16 in Murfreesboro and presented a Distinguished Service Award.

On behalf of the KOC, Dr. Russell Betcher accepted the award from Jeromy Davidson of Westview High School, the president of the TIAAA.

“The TIAAA was happy and honored to recognize the KOC,” said Central High Athletic Director J.D. Lambert, who is a TIAAA board member for District 2. “In reality, the athletic departments and schools couldn’t survive without the efforts of the athletic trainers from KOC.”

The ATCs are like first responders. They also work closely with KOC physicians through the healing process and couldn’t be happier when they see student-athletes return to play again.

The Knoxville Orthopaedic Clinic has been providing service to the Knox County School system since the late 1980s’ Friday night football coverage.

In 2003, KOC partnered with the local hospital system to put certified athletic trainers in every KCS high school.

“Each trainer is at all the home events that take place,” said Lambert. “For example, at Central, we host a Thanksgiving tournament which has 24 basketball games and Mickey Brown was there for each and every one of those.”

Brown currently is transitioning from athletic trainer to Director of KOC’s Sports Medicine Outreach Program as longtime director Michelle Hansard will be resigning from that post in mid-May. Hansard has been with KOC since 2002 and the outreach director for 10 years after being an athletic trainer at West and Karns.

Hannah Melhorn will be the new trainer at Central and already is assisting Brown in the busy spring sports season.

“We have partnerships with those schools and also Concord Christian School and Lenoir City High School,” said Hansard. “We’ve also sent trainers to Tennessee School for the Deaf over the years when they’ve asked for help at major events and football games.

“We all work together as a team. We like to say we’re one big family.”

Communication is important in the athletic trainer’s job. When multiple sports events are happening, the trainer will be on site at the sport where injuries are more frequent but stays in close contact with all.

According to KOC, its athletic trainers work an average of 2,300 hours per year for their school.

“The service KOC provides – you can’t put a price on it,” said Lambert, “when you consider both the actual service they provide and the reassurance they give parents by knowing that their student-athletes are being taken care of.”

It has had a free Sports Medicine Day for teachers, coaches and athletic directors and provided low cost pre-participation screenings for Knox County student-athletes for that long, too.