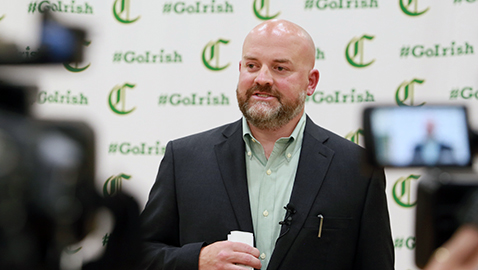 And the Irish lured a successful coach from Georgia to East Tennessee to take over the reins for the Catholic program.

Korey Mobbs was named the Irish’s coach at a press conference Wednesday afternoon at the Catholic High School gymnasium.

Mobbs comes to Catholic from Lanier High School in Sugar Hill, Georgia, a suburb of Atlanta.

At Lanier, Mobbs has been the head coach since 2014. He said it was tough to leave Georgia and his current job to come to Knoxville because of relationships that he established there, but also noted that Catholic and Knoxville are the right places for his family and him.

“When you come to a program as a football coach, you can tell how they’ve been coached and what kind of homes they come from by their body language,” said Mobbs, who compiled a record of 58-22 as a head coach and won a pair of region championships. “I saw their eyes as I paced nervously around the locker room and that validated that we made the right decision for our family.

Mobbs won a Georgia State Championship as a player in 1997 and said it was tough to leave Lanier due to the relationships that he’d established through the game of football but said “I look forward to establishing those same relationships here with the faculty, staff and administration at Knoxville Catholic.”

He didn’t rule out retaining some of Matthews’ former assistants.

“I’m just a guy who’s been blessed to coach a lot of young men and work with some great parents and great people.

Mobbs emphasized what he called the three Cs: character, class and commitment.

“People talk about winning games but I want to establish championship habits, and if we do that, the other things will take care of themselves.”

Mobbs replaces Matthews, who resigned after eight years last month after he was arrested for DUI and drug possession charges.